The Wizard of Dark Street: a book recommendation 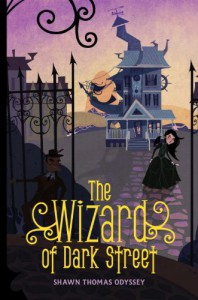 After seeing Shawn Thomas Odyssey read the prologue (embedded below!) to The Wizard of Dark Street, I knew I had to read this book. The deliciously sinister feel to the magical world mixed with a 12-year-old solving mysteries plus the simple fact that Oona (the MC) has a raven for a best friend all suggested a great combination I just had to read.

Oona Crate was born to be the Wizard’s apprentice, but she has another destiny in mind.

Despite possessing the rare gift of Natural Magic, Oona wants to be a detective. Eager for a case, she is determined to prove that logic can be just as powerful as wizardry. But when someone attacks her uncle–the Wizard of Dark Street–Oona is forced to delve even deeper into the world of magic.

Full of odd characters, evil henchmen, and a street where nothing is normal, The Wizard of Dark Street will have you guessing until the very end.

And it’s true! I most definitely was left guessing until the very end. I was flipping the pages to find out the whodunits and to see how all these seemingly separate mysteries would intertwine. Oona is an incredibly likeable character, and Deacon–her raven that is also an encyclopedia–is one of those creatures I really wish I had as my own pet/friend.

Mr. Odyssey has crafted a wonderfully complex magical world unlike anything I’ve ever seen–a sort of Harry Potter (I know, high praise indeed! But it’s the closest comparison I can find in terms of a dark but delightful magical universe) meets Encyclopedia Brown, and I highly suggest it to any and all lovers of fantasy, mystery, or middle grade!

And now, without further ado, here is Shawn Thomas Odyssey reading the prologue to The Wizard of Dark Street.

You tell me: Have you read this book? Is it even the sort of book you’d pick up?