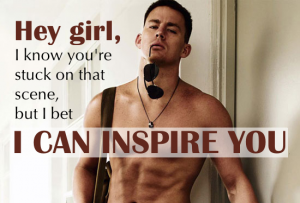 Writing constipation–a phrase I first heard from Anna Banks (author of Of Posiedon). Typically, people use the phrase to refer to having too many ideas to isolate and then write…but honestly, sorting through all my ideas has never been a problem for me. Wading through and then getting the story ideas onto a page is what makes us writers. The hard part is getting the ideas in the proper order…or perhaps even getting the proper idea at all.

And that’s why I refer Anna Banks’s definition for writer’s constipation. It’s what I call “writer’s clog” or what many people just call “writer’s block”…but, as Anna put it, you’re not actually BLOCKED.

In fact, you can always squeeze out a few words–they might all be crap–but you can get ’em out. Maybe even a few pages. Or, if you’re like me, you can squeeze out 200+ pages of crap before you even find the proper story (I mean, if you BICHOK enough, you’ll get something on the page), but what you write doesn’t actually flow. It doesn’t feel right. Hence, the constipation metaphor (how’s that for graphic imagery, huh?).

Well, now that we’re almost to the halfway point in NaNoWriMo, I’m guessing more than a few of you are dealing with some constipation. Or if you aren’t yet, I bet a few of you will.

I know I sure have. I hit it by day 6! But, having experienced this constipation with every single book or story I’ve ever written, I knew how to handle it.

But first, let’s decide if you’re suffering from writer’s constipation. Look for these tell-tale signs:

Okay, so you’ve checked off one of those things…or all of them. That’s cool. It’s part of the game. Some days, your creative bowels are happy. Other days, not so much. (Boy, these images just keep gettin’ better and better.)

Always start with number 1. If, after a few hours or a few days, you’re still feeling awful about every word you squeeze out, it’s time to move to step 2. But more often than not, the clog will vanish with a little BICHOK. See, even these writing masters agree:

“What I try to do is write. I may write for two weeks ‘the cat sat on the mat, that is that, not a rat.’ And it might be just the most boring and awful stuff. But I try. When I’m writing, I write. And then it’s as if the muse is convinced that I’m serious and says, ‘Okay. Okay. I’ll come.’”

“I learned to produce whether I wanted to or not. It would be easy to say oh, I have writer’s block, oh, I have to wait for my muse. I don’t. Chain that muse to your desk and get the job done.”

“I encourage my students at times like these to get one page of anything written, three hundred words of memories or dreams or stream of consciousness on how much they hate writing — just for the hell of it, just to keep their fingers from becoming too arthritic, just because they have made a commitment to try to write three hundred words every day…”

But, as Anne Lamott goes on to say, sometimes that doesn’t always work.

And you’ll KNOW when the writing isn’t working–when the clog is more than just mere laziness. There’ll be this brewing rage in your chest. A growing hatred for the story that you loved only a few days before.

“Now, what I’m thinking of is, people always saying “Well, what do we do about a sudden blockage in your writing? What if you have a blockage and you don’t know what to do about it?” Well, it’s obvious you’re doing the wrong thing, don’t you? In the middle of writing something you go blank and your mind says: “No, that’s it.” Ok. You’re being warned, aren’t you? Your subconscious is saying “I don’t like you anymore. You’re writing about things I don’t give a damn for.” You’re being political, or you’re being socially aware. You’re writing things that will benefit the world. To hell with that! I don’t write things to benefit the world. If it happens that they do, swell. I didn’t set out to do that. I set out to have a hell of a lot of fun.”

“Writer’s block is my unconscious mind telling me that something I’ve just written is either unbelievable or unimportant to me, and I solve it by going back and reinventing some part of what I’ve already written so that when I write it again, it is believable and interesting to me. Then I can go on. Writer’s block is never solved by forcing oneself to “write through it,” because you haven’t solved the problem that caused your unconscious mind to rebel against the story, so it still won’t work – for you or for the reader.”

“If you get stuck, get away from your desk. Take a walk, take a bath, go to sleep, make a pie, draw, listen to ­music, meditate, exercise; whatever you do, don’t just stick there scowling at the problem.”

Yep, as counterintuitive as it feels to most of us productivity-obsessed authors, letting it go can be critical. You have to stop writing and step away from the story. Think about it–let it simmer like a nice stew. All the ingredients are there, resting in your mind and subconscious. Let them naturally rise to the surface, interact, and finally solidify.

Or, if you want to be a bit more forthright about it, you can always sit down and say, “Why don’t I want to write this?”

In fact, let’s play out my internal dialogue when I hit my writer’s constipation last week.

“Why don’t you want to write this scene on the boat?”

“Because it’s BORING. I am bored writing it, and I just don’t care.”

“But it’s critical information. Somehow, all this stuff has to be conveyed.”

“Well, Eleanor is so emo right now because so many horrible things have happened. Plus, it’s redundant to have them get on a boat here and then board a boat down the Nile. ALSO, I have too many characters.”

“What if you changed the POV? You have Daniel’s POV in the novella–what if you opened book 3 from his POV. Then you can convey the necessary info without being bogged down by Eleanor’s depression. He can see Eleanor’s sadness, but we’re not trapped in her head.”

“Oooooh. That’s gutsy. My editor and readers may not like it.”

“But it feels right, doesn’t it? And then, because you’ve got that extra POV, you can split characters up. Half can go to Giza, half can stay behind. That would deal with the ‘too many characters’ problem.”

“Oh snap, that would work.”

“Oh, and then, you can move this airship crash scene in chapter 3 to later in the book. Instead of having it happen before Marseille, you can have it happen in Cairo. That way they don’t need the second boat and it keeps the middle exciting.”

The next morning, I woke up pumped to write. The words came clacking-clacking onto the keyboard without any hiccups. Do I expect to hit more speedbumps as the plot progresses? Absolutely. But I also trust my brain to find a solution.

And you remember that writing journal I talked about last week? Well, sometimes I actually WRITE OUT these questions. I sort through the problem in a stream-of-consciousness flow of words. Other times, I draw diagrams and make notecards. But most times, I just step away from the story, lay on my couch, and literally stare at the ceiling until things click into place.

And it’s not just a matter of letting go of the writing–it’s also important that you’re willing to let go of the story. Let go of an outline. Let go of some idea you’ve been imagining for years. Let go of all those words you’ve already written. That idea or that outline or those words might just be wrong.

For example, I wrote and rewrote this novella. But it wasn’t until draft 4, when I truly let everything go, that the proper story and order of events hit me. It isn’t perfect, but I do believe–deep down believe–that the bones of what I wrote in that final draft are right.

Another example is my NaNo book. I have been imagining this airship crash scene for almost 2 years now. It always took place right outside of Marseille, and so I wrote the scene exactly like that. But when I got stuck, after a lot of mulling and trusting my gut, I realized that crash scene needed to happen much later in the story and in a totally different location. I’ll keep what I wrote, but when I revise, it’ll need massive reworking.

Phew. This turned into a long post. SORRY. But hopefully there are some nuggets of useful wisdom in here for you and your NaNoWriMo project. Oh, and if you haven’t already, be sure to enter the giveaway for 5-page critiques from Sarah J. Maas and me. Also, follow our Pinterest board and check out our NaNo Forum! We won’t be hosting a #NaNoWriMoBattle today, but stay tuned tomorrow at 4 PM ET!

You tell me: How do YOU deal with a writing clog?