How I Plan a Book, Part 2: Before I Start Drafting

So as I mentioned last Friday, I only recently realized that I’m actually a planner and not a pantser. But my method of planning is erratic at best.

Disclaimer: this may not help YOU plan a book at all. It’s my method, right? And it’s a very fluid, not-too-organized, definitely not-too-strict method. But then again, perhaps it WILL help you. At the very least, maybe it will let you see the usefulness of some planning before you draft as well as the absolute, non-negotiable need for flexibility in an outline.

First, I get an unused spiral-bound notebook. (I used to try to use the same notebooks for multiple projects, but that was just too disorganized in an already pretty hectic process.)

So here’s my notebook for this year’s NaNoWriMo project: 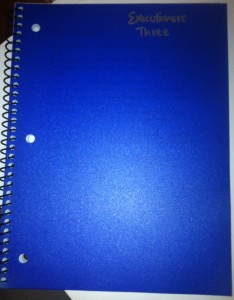 Now, as some of you know, I’m actually rewriting this book. Again. I’ve thrown out everything I wrote before and am only keeping character’s names, personalities, a few plot points, and the town where the story is set. I have two other notebooks that apply to my earlier versions of this story. They are sitting on a shelf devoted to spiral bound notebooks like these. 🙂

And, just in case you’re curious, here are some notebooks from other projects in the past year:

I don’t do anything particularly fancy with my notebooks. In fact, my second step is to open up the notebook and start writing.

Sometimes I write the bones of a scene or snippets of dialogue that have already occurred to me. Or I might BLAST EPIC MUSIC and write any ideas that pop into my head.

Sometimes I list different scene ideas. And then try to organize them with numbers.

I will do this a thousand times before I finish the project because the scene ideas I’d first planned no longer work as I actually draft. The key to writing a novel is to be constantly willing to change. You want your characters decisions to feel natural and consistent with who they are; you want plot points to flow organically; you want your passion for the project to always stay high (more on this next week).

Sometimes I write in stream-of-consciousness style as I try to sort through a sticking point. Here’s me trying to figure out who the crap one of the “bad guys” is:

Probably none of those ideas will come to fruition, but writing them out gave me enough juice to move on.

I do this by hand (with these amazing erasable pens I got addicted to years ago). Recently I saw a program from the creators of Scrivener, and it reminded me very much of what I do. So if you’re more into computers for idea-creation, then a mind-mapping program like Scapple might be the thing for you.

Now, I’m sure you have some questions. I will do my best to answer some I think of, but please don’t hesitate to ask questions in the comments! 🙂

How do you figure out what to write in the notebook?

This boils down to inspiration. Something moved me enough to want to write a book, right? I mean, what made YOU want to sit down and start a novel? Whatever that spark is–be it an idea, a character, a piece of music, etc.–I start there. I write it down and flesh it out as best I can.

Then, as I progress and try to sort out the direction of the story, the characters, etc., I SPEND MY LIFE on Wikipedia, Spotify, and Pinterest.

1. Wikipedia. is literally how I develop every single book I write. It’s just so easy to start with a subject (I started with witchcraft for The Executioners Three) and then spiral wildly through various links until I start to uncover some Very Cool Things (I ended up on ghost towns across the US). Many of the Very Cool Things get clicked through and ignored; many of them get jotted down in my notebook; and many of them get forgotten as I progress or after I start drafting. The point is that Wikipedia helps my brain juices get going.

2. Spotify. I’ve shared my love for Spotify a thousand times by now, but I’ll just say it once more. I cannot write without music, and often times a key piece of music will set the tone for an entire novel. I use Spotify to discover new music and get my Muse warmed up while I daydream story ideas.

Right now, I’m listening to this playlist at full volume as I amp myself up for some revisions.

3. Pinterest. Images aren’t critical for my planning, but I do really like them. And sometimes, an especially vivid image will inspire something HUGE. For example, A character named Merik in my fantasy WIP Truthwitch was developed almost entirely from the swagger in this picture of Ezio (Assassin’s Creed).

So how do you know when you’re ready to start drafting?

I know I’m ready when I’m either ITCHING to write the first scene (this happens maybe 10% of the time) or when I know I have no more excuses not to sit in that darn chair and start typing. The latter situation is definitely the majority. 🙂

Let’s be honest, guys: More often than not, I could use the excuse of “planning” and “research” to keep myself away from the keyboard indefinitely. It’s just so easy to say, “but  I’m not r-readyyyyyy!”

Sometimes, though, I’ll think I’m ready only to sit at the keyboard and lose steam three chapters in. (Erm, this literally just happened with The Executioners Three.) If I ever feel like I don’t want to keep writing or I just don’t know what the heck comes next RIGHT AFTER I STARTED THE DARN DRAFT (and should therefore be well aware of the story for a while to come), then it means I started drafting too soon. I will go back to the drawing board (stay tuned for a later post on this).

So then how many days/weeks/months do you normally spend scribble notes like a serial killers?

As long as I need to. I know–what a cop-out answer. But it’s true. As Ally Carter said in this post, “you never learn how to write a novel. You just learn how to write the novel you’re writing right now.” This is SO true. Every book I write requires something completely different.

For Truthwitch, I spent ~3 weeks of writing in my notebook, scouring Wikipedia, and listening to Two Steps from Hell at maximum volume. I filled half of that yellow notebook (above) before I FINALLY felt like I understood the setting and characters–or at least understood it well enough to start writing. Of course, as I wrote, I discovered a ton more about everything.

For this NaNo WIP, The Executioners Three, I’ve been mulling and brainstorming the idea for almost a full month. On Monday I knew I had enough to start rewriting now…but after the first 3 scenes, I ran out of steam and now it’s right back to the planning/brainstorming stage.

So you’re saying you KEEP outlining as you draft?

Yes. Yes, yes, yes, yes. The key to writing–for myself and for many authors I know–is to never get too attached to what you’d planned. Even if I write out what looks like an entire book (see the picture above with numbered plot ideas), if what I’d planned to write feels in ANY way off, then I head right back to my drawing board…or drawing notebook, I guess. 🙂

But don’t worry, I’ll get into all that later.

So stay tuned! On Friday, I’ll talk about what scene-by-scene planning looks like for me (hint: I totally learned it from the amazing Rachel Aaron) and then next week, I’ll get into how I plan when I’m stuck. Like really stuck. 🙂

AND, if you want a WAY MORE HELPFUL guide to this sort of brainstorming/outlining, I highly suggest Outlining Your Novel by K.M. Weiland. She has her own method which is WAY more organized than mine, but it covers almost all the same “figuring the story out” components that I also work through when planning.

You tell me (or ask me!): How do you outline your stories–assuming you plan at all?

Read Part 1: Of Plotters and Pantsers