I know I was supposed to give you guys the final steps of the Productivity Pyramid this week, but I found out rather suddenly that we were going to announce my new book deal today (instead of later this spring, as planned)…so DUH, new book deals took precedence!!

Of course, learning we were going to announce also led me to dancinglikeacrazyperson around my office (and then almost fainting because I’m so out of shape), before I hunkered down to get a few things wrapped up that I had planned to launch alongside the new series announcement.

But….LET ME ANNOUNCE TRUTHWITCH because if I have to type one more sentence without typing I SOLD A NEW SERIES, then I will probably die.

I sold a new series, guys!

And not just any series, but the one you all have heard me talk about, tweet about, and pin stuff for for the last year. This is my epic fantasy series that currently has more followers on Pinterest than my actually published series, and the same goes for my Spotify playlist! I think there’s just something more universally accessible and appealing to epic fantasy. Maybe it’s the scope and sweeping scale of the stories or the new, enormous worlds…Or maybe it’s just that swords are badass and everyone wishes they had one. 😉 Either way…

Truthwitch is coming out in fall 2015!

Obviously, I’m be freaking-out-excited about selling a new series, but what makes this SO SPECIAL is that it was acquired by Tor. TOR. As in the most well-known publisher of fantasy, sci-fi, and horror! And guys:  Tor is probably my most favorite publisher of all time. When I glance at my shelves, half the books have the awesome Tor logo on their spines (and what a logo it is! All Mount Doom craggy epicness).

But look, here’s more info on the deal from the print version of Publishers Weekly (or you can read the article online here): 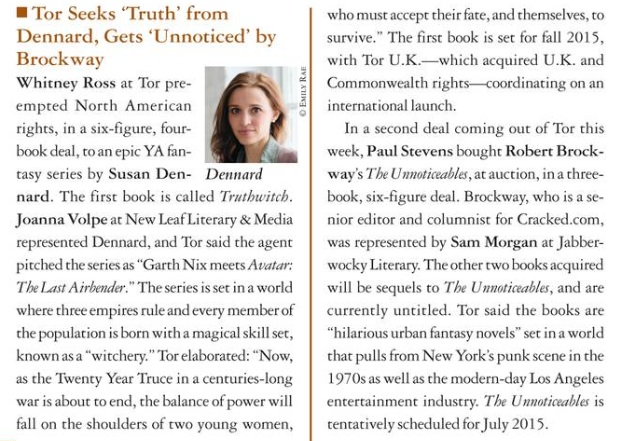 PLUS, Tor UK also bought Truthwitch in a separate deal, so I’ll finally have a book out in the UK!!!! That may not seem like a huge deal to all of you, but for me, it’s enormous for me. My whole goal is to reach more readers, you know? To connect with more people, so this is already a huge step in that direction! Poor Something Strange & Deadly just didn’t appeal to foreign publishers–it’s such a niche genre and I totally understand that. Just being epic fantasy has served Truthwitch well already.

True story: I might have started sobbing hysterically when I read the press release for Tor UK. I am so proud of Truthwitch and reading what my new editor thought of the series sent my emotions into the most happy, emo tailspin. Also, in case you want a slightly more thorough summary of the book, here’s the copy from the UK announcement:

In Truthwitch, expect intrigue, action and conspiracy, with some wonderfully tense romance woven into the excitement. On a continent where everyone is born with magic, witchcraft is failing as people are corrupted by their own magic. Unrest also grows as a twenty year truce ends between three warring empires, meaning trading treaties cease and war threatens. Only a mythical pair of witches can heal the taint in the land and bring balance. But the two young friends are yet to discover their fate, even as their world heads towards chaos.

Anyways, I won’t bore you with details of my sobbing and dancing and screaming. CLEARLY I am over the moon about selling Truthwitch, and it is all VERY surreal. So go add the book to your Goodreads shelf (if you’re so inclined) and follow me down to the next point of business…

Remember what I said, like, two paragraphs up? About wanting to reach more readers? Well, that’s the purpose of The Misfits & Daydreamers.

Basically, this will be a chatty newsletter PLUS a forum where I can interact with my fellow Misfits and friendly Daydreamers. 🙂 I’m hoping to connect with you all on a more personal level, and this newsletter/forum is the best approach I can find for that.

I love my blog, I try to post as regularly as possible and with as much high quality + helpful content as I can create. But there is a built-in distance here. Even with comments and emails, I don’t feel like I know you all well enough–and I’m not sure you know me. You know about my writing advice, but I rarely delve into other things.

So here’s my goal for 2014 and beyond: I want to know my readers better and I want you to know me. I also want to  be able to give content (free extra scenes, book updates, behind-the-scenes publishing insight, etc.) to you directly–and I also want to know right away if you enjoyed that content or if it missed its mark.

Now, in case you’re wondering about the name–Misfits & Daydreamers–I’ll explain. The Misfits was a name thought up by a fabulous fan for readers of the Something Strange & Deadly series. The Daydreamers are what I’ve decided to call  readers of my blog and fans of my writing advice.

As such, the Misfits forum and part of each email update will be for fans of my stories and books–things like teasers, cut scenes, interview, giveaways, etc. I’m hoping to share Strange & Ever After teasers along with Truthwitch teasers and any other fun stuff I have very soon!

Then the Daydreamers forum and a portion of the emails will be for fellow writers and aspiring authors (or published authors too!). You can see my writing process in action, I’ll answer questions about writing, and I’ll basically offer insights and updates that I don’t offer here, on my blog. One really cool thing I plan to offer (or I think it’s cool) is a behind-the-scenes look at traditional publishing. Since I recently sold Truthwitch, I am in the very early stages of its publication process. That means I can share each step–from finishing a draft to revising with my editor to cover design and beyond–as it happens.

And of course, I’ll want to hear from you guys–either in the forums or via email. 🙂 That way it’s a conversation and I can learn more about YOU over time.

If you’re interested in becoming a Misfit or a Daydreamer (or both!), then subscribe below or in the sidebar. Plus, register for the forum, if you life. 🙂

Okay, I am heading out now to eat leftover snickerdoodles and celebrate. I hope to see you soon, fellow Misfits and Daydreamers!