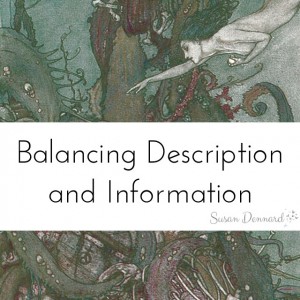 But there are ways to weave in description and setting and backstory WITHOUT bogging down a scene. It all has to do with timing and what feels natural.

Now, I should mention that when it comes to first drafts, I am ALL FOR infodumps. Why? Because you’re figuring things out! Those infodumps are how you, the writer, get familiar with the world and the history and the characters. Infodump AWAY. I know my first drafts are riddled with that stuff.

Once you’re actually at a point where you want to make sure your infodumps are broken into something more palatable for the reader, then it’s time to break apart your book by scene. This is where timing comes into play.

So step one: break apart your book by scene. If you’re not using Scrivener, start (every writer should be using Scrivener. Period.). It allows you to very easily look at your book scene by scene. Another option is to sketch out a quick outline or handwrite scene index cards.

Once you’ve got your book divided, what you need to next is figure out: what information in this scene is CRITICAL for the story? Like, a scene simply won’t make sense without X-information in it…so what is that X? Once you know your X, you weave in that information and only that information. The rest of the stuff? Cut it out for later inserting.

Now you move to the next scene and you ask the same question. If the info isn’t necessary to the plot, character arc, or setting, then don’t mention it here. Save it for when it is necessary.

Here’s an example: recently I had this MASSIVE chunk of backstory in my 3rd scene of Truthwitch. A savvy critique partner mentioned that the story felt slow when my heroine started thinking about her BFF’s nasty uncle. Since that uncle isn’t actually introduced for another 10 scenes, then knowing all about him wasn’t necessary yet.

So I cut out that backstory and saved it for a later scene in which the uncle’s history became critical to the plot.

Note: as I go through my book scene by scene, I’ll often find that I’m actually missing critical information. So then, I’ll not only weave in my chopped-up infodumps, but other necessary backstory or description.

Okay, so now you know WHERE information needs to go on a macro level, but what about on a smaller, more micro level?

So let’s say you’ve cut your infodump and found the perfect scene to reveal it in…but where within that scene?

Well, now you ask the question: when would a character naturally think of this backstory or notice this setting description? Maybe there is a point in which the dialogue brushes against your X topic. Great! Plop that information in there!

Like, let’s say your character is discussing X, so it would be natural for them to also think of X (and thereby relay that backstory).

Or maybe your character is walking through a city (hopefully with a goal in mind and something happening that’s a bit more active than simply walking), and as he/she encounters X piece of setting, you can naturally drop in the description/history.

Of course, I still have to break the infodump into bite-sized pieces…

Make It NOT an Infodump

To avoid having your readers’ eyes glaze over or having them commit the dreaded “skim”, I am a big proponent of short paragraphs. I write that way and I read that way. Paragraphs longer than a few sentences get skimmed, and I know I’m not the only reader like that. It’s just human nature in this busy modern day. 🙂

To keep your readers engaged and to keep the information/backstory/description from slowing down a passage (and thereby becoming an infodump), you need to weave the information across several dialogue exchanges or several actions. Basically, you’re taking your giant block of text, cutting it into paragraph (or smaller) chunks, and then returning those smaller pieces  to the narrative.

Or, better yet, introduce information in dialogue! If you can make the information feel natural in dialogue, then you can weave your backstory into both dialogue and thought.

Warning about dialogue: do NOT commit the dreaded As you know, Bob. This is when you have a character say something he/she already knows to someone who also already knows. It’s clear that you are ONLY doing this for sake of sharing information, and it feels forced, unnatural, and all-around bad.

To show you what I mean about “weaving”, here’s my passage from Truthwitch. It’s HIDEOUSLY unpolished and will no doubt change before this book actually releases in 2015, BUT I want you guys to see what I’ve done. In this scene, my heroines are trying to come up with a plan for their immediate future–and if they don’t scrabble a plan together, they could wind up dead. (All the critical info/backstory is in red.)

Noelle gnawed her lip. Scratched her collarbone. Then a new idea hit. “Didn’t we hear last week that Emperor Henrick is gathering Aetherwitches in Praga? He said it was for diplomatic training…”

“But my witchery said that was a lie,” Safi finished, drumming her fingers on the counter. Safi’s magic was aligned with the Aether element—as was Noelle’s—so her power was linked to the spirit and the mind.

“Maybe,” Noelle mused aloud, “Henrick is actually gathering witches for the resuming Great War. Maybe Henrick actually wants military officers and your uncle wants you to join. It wouldn’t be the first time he’s threatened you with the Officer’s Academy.”

Again, I’m not saying I’ve done a great job here (rough draft!), but because the characters are trying to come up with a plan (that’s the scene’s goal), then it works for them to relay certain kinds of information through dialogue. This is what they’d naturally be thinking of!

Here’s another spot in that same scene where I share info through thought (in red) as well as character motivations/insight (in blue):

Her fingers worked fast to untie her scarf…and her sweat-soaked hair toppled down.

Air washed over her forehead, her scalp—cool and wonderful. When she and Safi reached the Hundred Isles, Noelle would never need a scarf again. There were no laws against Nomatsis in Nubrevna. She could wake up each morning and let her hair simply be.

She could let herself simply be too, though that feeling was harder to imagine. Still, her heart beat hungrily every time she thought of it, and when she crossed to the wall of Mustef’s copper pots, that same excited thump took hold.

Last example. This excerpt (same scene again!) shows how to weave in setting (the characters are interacting with it–and it’s in green) while also weaving in more information through dialogue (they’re still planning!):

Noelle felt her face sink into an un-Threadwitch-like frown. “I wasn’t expecting there to be so many guards at the wharf.” Her hand jerked through empty space—the entrance to the shop. If she kept going straight through the hall, she’d hit the stairs to Habim’s and Mustef’s bedroom overhead. Instead, she swerved left and whispered the spell-triggering word, “Alight,” as she walked in.

At once, twenty-six bewitched wicks guttered to life, revealing bright, curly Marstoki designs on the walls, the ceiling, the floor. It was overdone—too many rugs of clashing patterns leapt at Noelle—but like the coffee, westerners had a certain idea about how a Marstoki shop ought to look.

With a sigh, Safi staggered past Noelle to the nearest pile of pillows and sank down. “There are a lot more guards than usual. Do you think they’re expanding their ranks for the end of the Truce?” Safi’s head cocked. Then she gave a decisive nod. “They are. My witchery says it’s true.”

Again, please don’t judge the first-drafy-ness of those excerpts. 😛 The point is to show you how you can weave things in for a natural conveyance of information. As long as your characters interact with the setting you describe and discuss/ponder things that feel natural to the plot’s progression, then you should be good to go!

So there you have it! (I hope that helps some, Emmy. 😉 Thanks for asking the question!) You guys tell me: how do you deal with the dreaded infodump?