How to Craft Characters: From Opening Lines Spring Voice 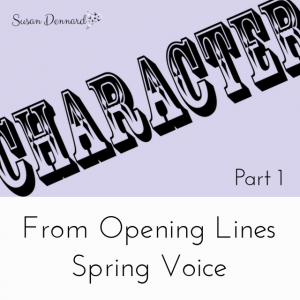 Recently, I received this question in my inbox:

Honestly, at first I was like, “I HAVE NO IDEA HOW I DO THIS.” I’m such a free-writer and character is one of those things I really, really don’t plan well (I scribble things in my notebook, but it always changes as I draft).

So clearly I can answer part 2 of the question with great confidence: No, I don’t work on getting to know my characters before I draft. I get to know them AS I draft, and then I make sure voice/backstory/etc. all line up in revisions.

But, seriously, how DO I get to know my characters while I’m drafting? This isn’t something I’ve never thought too hard about. The voice is just there…or it isn’t. So as I always so when I get a tough question, I grabbed a piece of scratch paper and tried to break down what I do. What I ended up writing down are what I consider the components of character (and these are in order of importance):

I thought I’d spend the next few posts breaking each of those character components down a bit more. This week, we’ll address voice.

Now I just did two posts in the Misfits & Daydreamers on voice–here’s one on what voice is and here’s one with tips to find your voice. I also have this post on troubleshooting POV and voice (the key is in the filtering!).

As I was trying to break apart how I find character, I realized that there was ONE MORE STEP in my voice-finding toolbox that I forgot to mention in the newsletter: opening lines.

But let’s back this up just a bit.

I’ve mentioned before that I write stories based on character. My heroes, heroines, villains, and love interests–they dictate the plot and I just hang on for the ride. IF I don’t have a character, then I don’t have a story. Period.

Yet in both of those head-desk-just-kill-me-now instances, when I finally stumbled upon the Right Story, I found it because I discovered the Right Voice.

So actually, the title of this post would more accurately be:

From Opening Lines Springs Voice (From Which Springs Character)

But that’s a mouthful. 😉

Basically, something magical happens when I’m ready to write the Right Story. An opening line will just appear in my mind. Poof!

I wish I could tell you HOW these opening lines (and subsequent voice) appear…But I honestly don’t know. All I can say is that it’s a culmination of all those scribblings in the notebook and my character playlists and the feel/promises I’m trying to create within the story. They knock around in the back of my skull for so long that eventually they swirl into something cohesive.

Now, since I can’t really explain/teach the pre-opening line magic, I want to at least show you how this process works for me AFTER I have an opening line. Below, I’ve got a smörgåsbord of opening lines to expound upon (some published, some shelved, some forever works in progress).

“I scowled at the incoming train from New York–the one my brother was supposed to be on.”

This was originally what I wrote as the opening line to SS&D. It came to me after a month of researching and outlining (back when I still tried to force myself to be an outliner). Poof! Here was this line, and it immediately set the stage for Eleanor’s feisty attitude and her complete lack of patience. Like, I could just imagine her face, her bubbling frustration, and her need to do something already!

If you’ve read the book, though, then you know this is NOT the opening line in its published form. I took some external feedback that suggested cutting my first 2 pages and starting in media res. Yet, to this day I wish I had kept that opening line. But ah, c’est la vie.

A Dawn Most Wicked

“This was not how best friends hugged.”

I was having a LOT of trouble finding Daniel’s voice in ADMW. Essentially, I had agreed to write this novella thinking it would be easy to connect with Daniel…and the opposite turned out to be true. I only ever knew him through Eleanor’s eyes. I had NO IDEA what was going on in his head, and everything I tried felt forced. Wrong.

So I skimmed back through some of my shelved projects (one of my tips for finding voice!) and I came across one of my most favorite romances I’d ever written–a romance between best friends. The tension was so great, and suddenly I realized this was where I’d gone wrong with Daniel! He hadn’t been jilted by Cassidy (as I was originally imagining), but rather he was her BFF and madly (silently) in love with her. Once I knew that, his character literally just poured out of me.

Note: I went back and added a prologue (so the line above is now the opener to Chpt. 1), but it was the line that set off the rest of the story/character.

“Everything had gone horribly wrong.
None of Safiya fon Hasstrel’s carefully laid plans for this hold-up were unfolding as they ought.”

When I originally sat down to start drafting this idea swimming in my head, I’d planned to write my from my Threadwitch character’s POV. But after a few false starts with her, I realized I wasn’t connecting. Then, after several days away (one of my tips for finding voice!), this line just HIT me. And I knew–deeeeep in my gut knew–that I needed to open the book from the Truthwitch’s POV instead.

Once I had Safi’s voice on the page, the story just exploded out of me.

Note: I ended up going back and adding a prologue…which then ultimately got cut again. But you can read that prologue here, if you’re curious. 🙂

“If you were to ask Clara when it all began, she would say, without hesitation, on May fourteenth of her fourteenth year. It was in the afternoon.”

This work-in-progress came to me in one of those I-wasn’t-planning-on-this-but-I-have-an-idea-and-must-write-it-now moments. Like magic. So I shot to my keyboard and just started typing.

Of course, I realized pretty quickly that it was different from anything else I’d written. I had an almost omniscient, almost tongue-in-cheek sort of narrator, and soon enough, I realized this meant the project was middle grade. (And, if you’re curious, because I knew it had a great MG vibe, I changed the age to be 12 instead of 14.)

So that concludes Part 1 in this How to Craft Characters series. I’ll be back next week to talk about desperate needs (i.e. goals and motivation!). You tell me: do you find voice or character spring from some magical place? How do YOU get to know your characters?