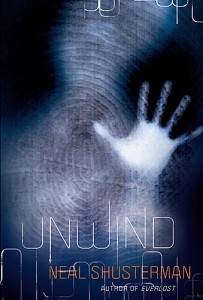 Neal Shusterman’s Unwind starts with a bang.  It hooked me hard, and then the action stayed high until the end.

In this book’s frightening future, teenagers can have their bodies “unwound”.  This means their bodies are harvested for parts — it’s organ donation to the extreme.  Kids who don’t behave well (like Connor) usually end up unwound.  Kids from orphanages (like Risa) often end up unwound.  And kids known “tithes” who are raised in the shadow of religion (like Lev) end up unwound.

But Connor and Risa aren’t ready to go to harvest camp, and though Lev is all jolly about his future death in the name of God, Connor and Risa need Lev’s help to escape their own death sentences.  Now the three are heading across the country tryin’ to outmaneuver the juvey cops and survive until they’re 18…  ‘Cos once you’re 18, you can’t be unwound anymore.

Too bad eighteen is still many years away.

I enjoyed this book quite a lot.  Like I said, it’s action-packed and, at times, disturbing.  There were some pretty cool twists — the sort that really resonate because you didn’t see them coming until they actually hit.  Then bam!  The twists make perfect sense.).

Though I never felt a deep connection to the main characters, I still cared about what happened to them — I definitely didn’t want them to be unwound!  Strangely enough, my favorite people were some of the bizarre secondary characters (Hayden, CyFi, the Admiral).

My best part about the book was Shusterman’s inclusion of real articles from present day.  Articles that send chills down your spine.  You’ll start to think that maybe this unwinding thing isn’t so far-fetched.  Like, maybe it could all happen one day — or maybe it already does happen.

If you’re in the mood for science fiction, dystopian, or just good ol’ action, then definitely pick this book up.