Sorcery and Cecelia: a book recommendation 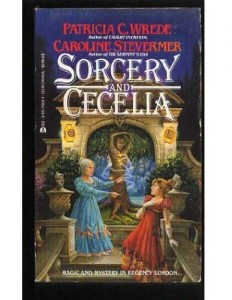 I first read Patricia C. Wrede’s and Caroline Stevermer’s Sorcery and Cecelia almost fifteen years ago (as young Yahong kindly pointed out recently, I am old) when it still had the cover you see to the right.  It has since been reprinted, given a snazzy new cover (see below), and also given sequels.  I have not read the sequels (though they are in my enormous To Be Read stack), but I have read Sorcery and Cecelia at least 5 times… Possibly more… It’s just so good!

It’s 1817, and Kate has been sent to London for her sister’s debut.  When she stumbles into a party and ruins the poison chocolate meant for someone else, she suddenly has a whole world of magic (and trouble!) out to get her.  To make matters worse, the odious marquis (for whom the poison was meant) is entirely too handsome and simply will not leave Kate alone.

Meanwhile, Cecelia, Kate’s BFF, is stuck back in Essex trying to console her mopey brother whose heart has broken since Kate’s sister went away.  But oh, bother — now Oliver has been turned into a tree, there’s a new girl in town who is a bit too bewitching to be natural, and what is that infuriating (yet rather dashing) James doing spying on everyone? 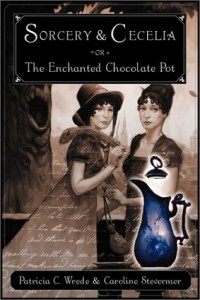 This book is told in a series of letters, alternating Kate and Cecelia.  What makes it SO AWESOME is that it was actually written as a series of letters between Stevermer and Wrede.  Stevermer = Kate, Wrede = Cecily.  They started it as a writing game/exercise, and then they were having so much fun, they decided to actually go all the way and make it into a book!

And, my dear friends, reading the book is so much fun too!  You can just feel the enthusiasm on the page, and both Kate and Cecelia are such lovable characters (though I’m more of a Cecelia fan, myself).  Plus, James?  And the Mysterious Marquis?  DOUBLE SWOON.

If you like Jane Austen, Regency tales, historical capers, or heroines who can kick butt without spilling their tea, then you will love Sorcery and Cecelia.

You tell me: Have you read Sorcery and Cecelia?  The sequels?  Or, do you have any other great historical/fantasty YA novels to recommend me?  Most importantly of all, would you ever consider writing fictional letters back and forth like these authors?

7 “random” things about me LTWF: Building Plot from Character