The Hidden Goddess: a book recommendation 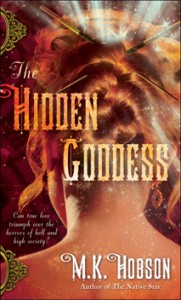 This thrilling sequel to M.K. Hobson’s The Native Star is downright wonderful.  Somehow, it manages to be even better than its predecessor.  Emily is one of my favorite heroines, and Stanton–oh, Stanton–I shall love you forever.

Like it or not, Emily has fallen in love with Dreadnought Stanton, a New York Warlock as irresistible as he is insufferable. Newly engaged, she now must brave Dreadnought’s family and the magical elite of the nation’s wealthiest city. Not everyone is pleased with the impending nuptials, especially Emily’s future mother-in-law, a sociopathic socialite. But there are greater challenges still: confining couture, sinister Russian scientists, and a deathless Aztec goddess who dreams of plunging the world into apocalypse. With all they must confront, do Emily and Dreadnought have any hope of a happily-ever-after?

To be honest, this summary does not do the book justice.  I was literally on the edge of my seat because 1) the story was so freaking exciting, 2) the mysteries were so compelling and twisted, 3) the 1876 New York City setting practically breathes with its own life and depth, and 4) Emily is made of 100% kick-butt awesome.

If you haven’t read The Native Star, then go–NOW!  And then after you’ve devoured that amazing novel (I voted for it for the Hugo Awards!), move onto The Hidden Goddess.  You won’t be disappointed.

(Thank you for reminding me to read it, Adriana!  I’m sooooo glad I did!)

You tell me: Have you read Hobson’s series?  Do you have any other bustlepunk-type books to suggest?