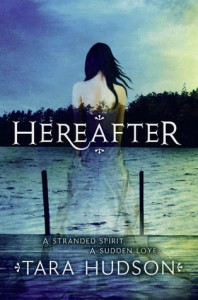 Then I got an ARC of debut author Tara Hudson’s Hereafter, and she pretty much flipped my expectations around.  Maybe it was her lyrical voice or the gentle sweetness that grows between Amelia and Joshua–either way, I adored this story.

Can there truly be love after death?

Drifting in the dark waters of a mysterious river, the only thing Amelia knows for sure is that she’s dead. With no recollection of her past life—or her actual death—she’s trapped alone in a nightmarish existence. All of this changes when she tries to rescue a boy, Joshua, from drowning in her river. As a ghost, she can do nothing but will him to live. Yet in an unforgettable moment of connection, she helps him survive.

Amelia and Joshua grow ever closer as they begin to uncover the strange circumstances of her death and the secrets of the dark river that held her captive for so long. But even while they struggle to keep their bond hidden from the living world, a frightening spirit named Eli is doing everything in his power to destroy their newfound happiness and drag Amelia back into the ghost world . . . forever.

The first thing that pulled me into this novel was Amelia’s voice.  No pun intended, but it was haunting. Her words felt as ethereal as her ghostly form, and that captivated me.

Then, as I came to discover Amelia’s plight, all I could think was, “I gotta know more. Turn page now.”  I was desperate to know what was happening to her, why she was a ghost, and what was so creepy and awful about the river.

Enter stage left: handsome, sweet Joshua, and I couldn’t put the book down. I read it in two days, and it was a pleasant reminder that sometimes exploring outside my usual reading-diet is a good thing.  Like I said above: paranormal romance isn’t really my go-to-genre…but this is so much more!  There’s mystery, terror, and sweetness on every page.

So, if you’re in the mood for a love story or a ghost story, then be sure to get your hands on Hereafter.  It’ll be in stores on Tuesday!

AND STAY TUNED: I’ll soon be featuring an interview with the lovely Ms. Hudson! Yay!

You tell me: Are you a fan of paranormal romance or ghost stories?  Do you have any to recommend (now that I’m a convert)?

What do YOU want to see from ME? LTWF: How to Write a Scary Scene