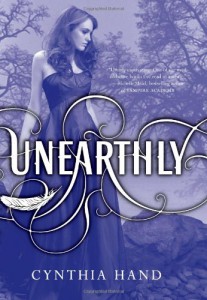 I picked this book up based on a friend’s gushing, and even then, my first thought was, “Angels? Huh.”

Well, I was pleasantly surprised.

Then I was desperately engrossed and could not put the book down until the last page.

Clara Gardner has recently learned that she’s part angel. Having angel blood run through her veins not only makes her smarter, stronger, and faster than humans (a word, she realizes, that no longer applies to her), but it means she has a purpose, something she was put on this earth to do. Figuring out what that is, though, isn’t easy.

Her visions of a raging forest fire and an alluring stranger lead her to a new school in a new town. When she meets Christian, who turns out to be the boy of her dreams (literally), everything seems to fall into place—and out of place at the same time. Because there’s another guy, Tucker, who appeals to Clara’s less angelic side.

As Clara tries to find her way in a world she no longer understands, she encounters unseen dangers and choices she never thought she’d have to make—between honesty and deceit, love and duty, good and evil. When the fire from her vision finally ignites, will Clara be ready to face her destiny?

I don’t think I’ve ever grinned so hard while reading a book. Seriously. The boys–oh the boys! Swoon-worthy to the max. I HAD to know which boy she was gonna wind up with (and oh boy, I loved them both! There was no clear winner!).

I also HAD to know how the vision we see on page 1 was going to play out. And what an enormous, unexpected surprise it was to watch it all unfold!

And finally, I HAD to know if the people I suspected of being bad really were bad…but alas! That question remains unanswered (so you can bet I’ll be snagging the sequel as soon as I can).

One thing I found particularly refreshing with this YA paranormal was how close the MC, Clara, was with her mom. It’s nice seeing parents take a central, benevolent role. I am SO guilty of a “bad” mama in Something Strange and Deadly, so I’ll have to take some tips from Ms. Hand.

If you like heroines who are just getting their wings and learning to fly (both figuratively and literally), you like a fantastic, heart-pounding romance, or really cool spin on angels, then be sure to check out Unearthly.

You tell me: have you read Cynthia Hand’s Unearthly? If so, what’d you think?