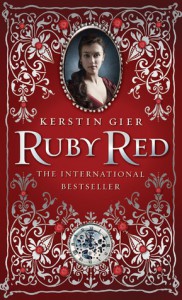 My mind was literally blown after finishing this (read my Goodreads review if you don’t believe me). All I was really capable of doing was gaping at the computer screen and desperately wishing the sequel, Sapphire Blue, was available now.

Or that my German skills were better so I could tackle book 2 in its original form.

This book is SO. GOOD. Buy it–don’t even wait to read this review. Just run to the nearest store or library and start reading.

Gwyneth Shepherd’s sophisticated, beautiful cousin Charlotte has been prepared her entire life for traveling through time. But unexpectedly, it is Gwyneth, who in the middle of class takes a sudden spin to a different era!

Gwyneth must now unearth the mystery of why her mother would lie about her birth date to ward off suspicion about her ability, brush up on her history, and work with Gideon–the time traveler from a similarly gifted family that passes the gene through its male line, and whose presence becomes, in time, less insufferable and more essential. Together, Gwyneth and Gideon journey through time to discover who, in the 18th century and in contemporary London, they can trust.

First of all, Gwyneth is one of the most likable heroines ever. Yes, truly. Ever. She’s hilarious, brave, clever, and absolutely endearing. She reminded me a lot of Sophie in the Hex Hall series but rather than a world of witches and demons, Gwyneth is in a world of time travelers and ghosts.

And boy did I LOVE that world. Sure, it’s modern day London–but not really. It’s also the early 20th century, the late 18th century, and pretty much every-when in between. Everything about it felt like something just outside of time–and I loved that.

And did I mention Gideon? Talk about swoon-worthy! Everything about his banter with Gwyneth was grin-inducing.

OH, WHY ISN’T THE SEQUEL OUT YET? I NEED IT. Seriously, this ache in my chest will not be erased until I know what happens. Who’s good? What do Gwyneth’s new powers all mean? And what the heck will happen with her and Gideon??

Also, I wanted to say that I am downright amazed by the quality of this translation (done by Anthea Bell). It was flawless, and whatever tweaks she did to make it all transition between languages correctly, they were superb.

So, if you like strong and funny heroines, adventure and intrigue, or stories of time travel, then be sure to pick up Kerstin Gier’s Ruby Red.

(Note: I’ve spent two weeks now trying to find a similar book to feed my need for MORE. If you’ve got any suggestions, please share!!)

You tell me: Have you read Ruby Red? What did you think? Do you have any other spunky-heroine-books to suggest?