The Faerie Ring: a book recommendation 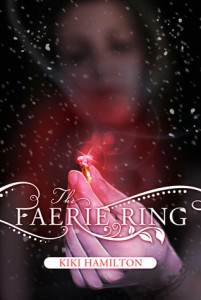 I had very high expectations going into Kiki Hamilton’s The Faerie Ring, and I’m delighted to say the book did not disappoint.

The setting was so vivid and well-drawn, I could imagine 1871 London perfectly. The crisp winter, the clothes, the palaces–it’s all developed brilliantly.

As such, this is one of those books you want to read curled up in your bed while the blustery wind blows outside. (And yes, I did read the book curled in my own bed while the autumn winds blew.)

The year is 1871, and Tiki has been making a home for herself and her family of orphans in a deserted hideaway adjoining Charing Cross Station in central London. Their only means of survival is by picking pockets. One December night, Tiki steals a ring, and sets off a chain of events that could lead to all-out war with the Fey. For the ring belongs to Queen Victoria, and it binds the rulers of England and the realm of Faerie to peace. With the ring missing, a rebel group of faeries hopes to break the treaty with dark magic and blood—Tiki’s blood.

Unbeknownst to Tiki, she is being watched—and protected—by Rieker, a fellow thief who suspects she is involved in the disappearance of the ring. Rieker has secrets of his own, and Tiki is not all that she appears to be. Her very existence haunts Prince Leopold, the Queen’s son, who is driven to know more about the mysterious mark that encircles her wrist.

Prince, pauper, and thief—all must work together to secure the treaty…

Tiki, the main character, is tough and endearing–the sort of gal you instantly root for. Plus, what an awesome name!! Her gang of orphaned pickpockets is just as lovable as she is (I totally wanted to join their happy family), while the very swoon-worthy Rieker has a secret history I didn’t see coming at all. The Fey are deliciously wicked and creepy. Oh, and Prince Leopold–what a fun addition to the cast!

Another thing I especially loved about The Faerie Ring was how all the different elements from the start of the book–subplots hinted at and character secrets–came together for a big KAPOW at the end.

Also, I really must reiterate the deliciousness of Rieker, the mysterious criminal with dashing gray eyes. He’s like Dimitri from Anastasia meets Vidanric from Crown Duel–sexy combo, right? I sure thought so…

All in all, this was a great fantasy! If you like pickpockets, intrigue, or Victorian London, then be sure to pick up Kiki Hamilton’s The Faerie Ring.

And STAY TUNED! Tomorrow, I’ll be sharing an interview with the author, Kiki Hamilton, and announcing the giveaway winner. If you haven’t put your name in the hat, then do so now–you might win your very own copy of The Faerie Ring.

You tell me: Have you read The Faerie Ring? What did you think?