In Defense of Food: a book recommendation 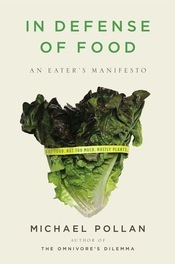 In honor of the coming Thanksgiving (and impeding over-indulgence), I thought I’d recommend a slightly different sort of book than my usual YA/MG recs.

Michael Pollan’s In Defense of Food is…well, shocking. And disturbing.

But good–very good. It changed my life and led to a complete overhaul of how I cooked, how I shopped, and ultimately, how I ate.

Michael Pollan’s last book, The Omnivore’s Dilemma, launched a national conversation about the American way of eating; now In Defense of Foodshows us how to change it, one meal at a time. Pollan proposes a new answer to the question of what we should eat that comes down to seven simple but liberating words: Eat food. Not too much. Mostly plants. Pollan’s bracing and eloquent manifesto shows us how we can start making thoughtful food choices that will enrich our lives, enlarge our sense of what it means to be healthy, and bring pleasure back to eating.

Pollan presents some major “food for thought” (ha, yes, the pun is intended). He shows you how distorted the Western approach to eating is–how we view our food as “nutrients” instead of food, how we rely on science/government/industry to dictate what and how we eat, and how deeply flawed the entire Western relationship to eating has become in the last 50 years.

We “diet” instead of “eat”. We shop according to invisible things called “nutrients” instead of simply buying food. We trust magazines and labels instead of the eating habits defined by millennia of successful cultures around the world.

Basically, when I eat traditional anything, my body loves me.

But when I eat packaged, processed, fast-food (but undeniably delicious) crap? I need afternoon naps, lack the mental acuity my career demands, and feel all-around GROSS.

So if you want to learn what you’re really eating…or if you’ve been considering leaving processed foods behind (and just need an extra nudge)…or if you’re simply interested in learning about American diets, then be sure to read In Defense of Food: An Eater’s Manifesto.

You tell me: have you read this book? Or anything else by Michael Pollan?