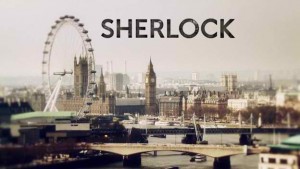 This. Show. Is. AMAZING.

It is without a doubt the best TV show I’ve seen in ages–the first AND second seasons. Better than Downtown Abbey (YES! I DID JUST SAY THAT!), yet just as well-acted…

Season 1, Episode 1: Wounded in Afghanistan while in the Army, Dr. John Watson returns to contemporary London and through a mutual acquaintance becomes the flatmate at Mrs. Hudson’s house at 221B Baker Street with the brilliant if eccentric private investigator Sherlock Holmes. There have been three identical apparent suicides, and Inspector Lestrade asks for Sherlock’s intervention over the fourth, the suspicious death of Jennifer Wilson. As she lay dying she wrote ‘Rachel’ in the dust and Sherlock deduces that this was not only the name of her stillborn daughter of many years earlier…

Wow–what an introduction to this series. Hilarity, character-chemistry, story twists, and edge-of-the-seat tension–this episode (and the rest in season 1), have it all.

Sherlock is, of course, the highlight of the series. Benedict Cumberbatch is just stunning as this modern-day Sherlock.  And Watson–portrayed by Martin Freeman–is the perfect complement to the asshattery that is our main detective.

And honestly, I was worried season 2 could never live up to season 1…BUT I WAS WRONG.

It is somehow even better.

Oh–and did I mention that the stories are all based on the original Sir Arthur Conan Doyle tales? Because they are, and if you’re an original Sherlock aficionado, then you’ll recognize bits and pieces from those old tales.

So if you enjoy mind-boggling mystery, character cleverness, or laugh-out-loud hilarity, then be sure to check out Sherlock.

You tell me: Have you seen this TV show? Seasons 1 and 2?

Pub(lishing) Crawl: It’s my ARC, and I’ll give it away if I want to… The Best Freakin’ Jambalaya EVER