Museum of Thieves: a book recommendation 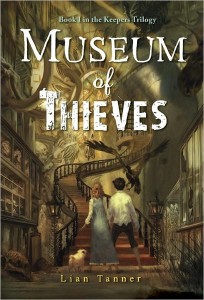 I saw this book in the store, and I literally did a double take. I mean, just look at that cover. Without even reading the summary on the back, I bought the book and started reading immediately.

And–fortunately–the story inside is just as good as the cover suggests.

Welcome to the tyrannical city of Jewel, where impatience is a sin and boldness is a crime.

Goldie Roth has lived in Jewel all her life. Like every child in the city, she wears a silver guardchain and is forced to obey the dreaded Blessed Guardians. She has never done anything by herself and won’t be allowed out on the streets unchained until Separation Day.

When Separation Day is canceled, Goldie, who has always been both impatient and bold, runs away, risking not only her own life but also the lives of those she has left behind. In the chaos that follows, she is lured to the mysterious Museum of Dunt, where she meets the boy Toadspit and discovers terrible secrets. Only the cunning mind of a thief can understand the museum’s strange, shifting rooms. Fortunately, Goldie has a talent for thieving.

Which is just as well, because the leader of the Blessed Guardians has his own plans for the museum—plans that threaten the lives of everyone Goldie loves. And it will take a daring thief to stop him. . . .
Museum of Thieves is a thrilling tale of destiny and danger, and of a courageous girl who has never been allowed to grow up—until now.

My favorite part of this book has to be the world–and not just the crazy, ever-changing museum, but the dystopian city of Jewel as well.  It’s just got so much room for storytelling! And who wouldn’t love a place where one can learn the Three Methods of Concealment (Concealment by Sham, by Camouflage, or by Imitating Nothingness)? Or a place where you can walk up a staircase (though it feels as if you’re going down) that changes steepness based on its mood–and is called Harry Mount, no less?

The characters–especially the villains–fit so well in the world. From the charmingly evil Fugleman to our brave heroine Goldie, each person had his/her own story that was deftly shaped by the world in which they all live. My favorite character is Broo–but I won’t tell you who or what he is. 😉

Museum of Thieves is the sort of book I’d recommend to lower MG readers. It doesn’t have the depth of story/character that an older reader or adult might crave, BUT it’s exactly what I’d want to see for the younger kids. In terms of storytelling, it actually reminded me a lot of Fablehaven, so if you enjoyed that MG, then you’ll definitely like Museum of Thieves.

So if you like adventure, cooky worlds, or fast-paced middle grade fantasy, then be sure to check out Lian Tanner’s Museum of Thieves.

You tell me: Have you read this book? Or do you have any other, similar MG fantasies to recommend?