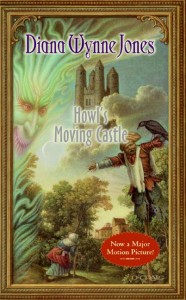 Everyone knows this book…or they at least know the Miyazaki film version. I adore Miyazaki–Spirited Away is one of my all-time favorite films–but…I have to say that the film version (though wonderful) is not as good as the book. This book is just PURE MAGIC.

Sophie lived in the town of Market Chipping, which was in Ingary, a land in which anything could happen, and often did–especially when the Witch of the Waste got her dander up. Which was often.

As her younger sisters set out to seek their fortunes Sophie stayed in her father’s hat shop. Which proved most unadventurous, until the Witch of the Waste came in to buy a bonnet, but was not pleased. Which is why she turned Sophie into an old lady. Which was spiteful witchery.

Now Sophie must seek her own fortune. Which means striking a bargain with the lecherous Wizard Howl. Which means entering his ever-moving castle, taming a blue fire-demon, and meeting the Witch of the Waste head-on. Which was more than Sophie bargained for…

First of all. Howl.

Let me repeat: HOWL. He is so, so, so swoon-worthy. The very first swoon-worthy, arrogant, short-tempered hero I ever encountered as a child. I was (and still am) utterly smitten.

Second of all. Sophie.

Can we talk about what a kickbutt heroine she is? She starts off as meek as a mouse, but she almost instantly transforms into one heckuva leading lady (incidentally, this coincides with when she transforms into an old lady).

Third of all. Resonance.

I’ve talked about it before–about the subtle layering of a story so that everything comes back in an epic, unpredictable-yet-totally-clever way at the end. You know, so the story resonates.  Well, this book has it in droves. Every little, seemingly inane detail comes flying back at the end for a climax of massively brilliant proportions.

I love this book. If you like…well…reading, you will love Howl’s Moving Castle too.

You tell me: have you read Howl’s? What did you think? Have you seen the film?

Publishing Industry Lowdown (March 19-23) The Problem Child, or That Story You Just Can’t Get Right