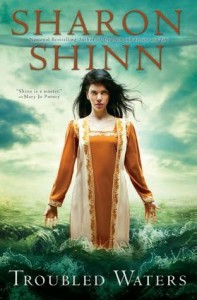 I picked up Sharon Shinn’s Troubled Waters at the suggestion of Sarah Maas. It had been quite a long time since I sank into an adult fantasy, and I’ll be honest: I had some trouble at first. I’m so used to the go-go-go! of YA, that the slower moving, deeper world-building of an adult book made it hard at first.

But by page 20, I was hooked. And despite the tiny print crammed onto 400 pages, I zoomed through the novel in two days.

Zoe Ardelay receives astonishing and unwelcome news: she has been chosen to become the king’s fifth wife. Forced to go to the royal city, she manages to slip away and hide on the shores of the mighty river.

It’s there that Zoe realizes she is a coru prime ruled by the elemental sign of water. She must return to the palace, not as an unwilling bride for the king, but a woman with power in her own right. But as Zoe unlocks more of the mysteries of her blood-and the secrets of the royal family-she must decide how to use her great power to rise above the deceptions and intrigue of the royal court.

I think my favorite thing about this book is the world. It’s like Avatar: the Last Airbender but DEEPER. The whole idea of random blessings and elements governing our behavior–I adored it. It’s the kind of world I wish I could live in. The kind of world that has stuck with me long after I finished the book. The kind of world I want MORE of. (For those of you who’ve read this: I’ve decided I’m a coru woman with a sweela heart and maybe a little hunti thrown in too!)

My next favorite thing–what REALLY had me turning pages–was the love interest. I won’t tell you who he is. I was literally praying he would be The One from the first sentence I met him, yet not once does the heroine even consider him in that way (well, not for a while, I mean). He’s just “a character”. Some guy in her path, and their relationship forms in such a natural way.

Personally, I looooove romances like that–romances in which there’s no indication that this dude might be The One…yet the reader roots for him anyway. To me, it takes incredibly deft storytelling to create a romance like that. And Sharon Shinn pulls it off. Without once declaring the hero “handsome” or describing the heroine as “having chills” when he’s around*, I was desperate for Zoe (the MC) to choose this guy.

Oh, my stomach knots of happily just thinking of him. And thank goodness! There’s going to be a sequel, due out in 2013. 🙂

So, if you like fantasy, epic world building, or delicious romance, then be sure to pick up Sharon Shinn’s Troubled Waters.

You tell me: have you read this book? Have you read anything else by Sharon Shinn? (I’ve read Summers at Castle Auburn–LOVE!)

*I don’t mean to suggest that romances that do describe the hero as a “hottie” or show the heroine’s “skin tingling” are bad. My own book does this, and as a lover of straight up romance, I’m all about the chest-gleaming-heroes. I just also respect the more subtle approach to love stories. 😉

Publishing Industry Lowdown (March 26-30) Pub(lishing) Crawl: Which Point of View is Right for You?