The Thief: a book recommendation 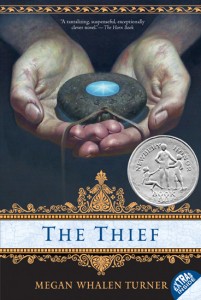 I’ve been on a fantasy kick lately (as I’m sure you can tell from my recent recommendations), and amazingly, every book I’ve picked up in the past weeks has been stellar. I had high hopes for Megan Whalen Turner’s The Thief, and I am pleased to say it did not disappoint

The most powerful advisor to the King of Sounis is the magus. He’s not a wizard, he’s a scholar, an aging solider, not a thief. When he needs something stolen, he pulls a young thief from the King’s prison to do the job for him.

Gen is a thief and proud of it. When his bragging lands him behind bars he has one chance to win his freedom– journey to a neighboring kingdom with the magus, find a legendary stone called Hamiathes’s Gift and steal it.

The magus has plans for his King and his country. Gen has plans of his own.

The world is Greek-based with politics and culture and myths galore. I could imagine it all so vividly–the olive trees, the mountains, the canyon river…Not to mention the GODS and GODDESSES. And the temples! At the risk of giving too much away, one of the temples in which A Great Many Things Happen had my jaw hanging–it was exciting, creepy, and oozing with story goodness. I wish I had put that temple in my book. 😉

But even better than the world are the characters. Gen–our protagonist–is arrogant, clever, and absolutely endearing. But he’s also a slightly unreliable narrator, so be forewarned! Of course, if he were totally reliable, then Turner couldn’t have set up the Super Shocking Twists that come later in the book. I love how Gen grows, and how, as we get to know the secondary characters, our opinions of them change right along with Gen’s.

Also, can I just say how much I love this cover? And the sequels–even more stunning.

So, if you like strong fantasy worlds, clever plot twists, or adventurous criminals, then be sure to pick up The Thief.

You tell me: have you read this book or the rest of the series? I’m already zooming through the sequel, Queen of Attolia, and loving it!