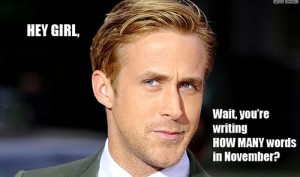 Oh. My. GOSH. We are so close to the end of NaNoWriMo. Can you taste it? I can taste it (or maybe that’s all the garlic mashed potatoes I gorged on yesterday for Thanksgiving. I could kill a vampire with this breath).

The last week is always the most awesome–unlike those aching middle two weeks. Why? Because you get this extra burst of crazy I-am-so-close-adrenaline. Be prepared to see people’s word counts go crazy.

The thing is, even if you don’t cross that 50K line–or even get close (there’s no shame in that; I’ve definitely done it before with NaNo), you still wrote more than you would have without NaNo…right? This whole National Novel Writing Month still motivated you to do something, and THAT, my friends, is amazing.

So no matter where your word counts maystand or where you reach in a week, you have still accomplished something.

This week, I’ve been obsessed with the Assassin’s Creed 3 soundtrack (I adore every soundtrack in that series, btw). It fits so well with the revisions I’m doing for the SS&D novella.

When I’m not revising…or working on the third book in the SS&D trilogy, I’ve also been hammering away at my WIP. It used to be just a light contemporary, but then inspiration struck, and it somehow became a light contemporary murder mystery (yes, I realize how juxtaposed that is). I thought I’d share a little clip from there.

Basically, Freddie and Simon are ex-best friends investigating a murder. Simon doesn’t think it’s a murder; Freddie does. While at cross country practice, Simon discover that one of their big clues has gone missing, so he has just run as fast as he can to Fred’s house so he can call his little brother (who is also “on the case” with them).

Oh, and as usual, all the first draft disclaimers apply–i.e. don’t judge.

I hammer my fist on Freddie’s front door. My chest is rising so fast I think I might be having an asthma attack of my own. Hot damn, that was the fastest two miles I’ve ever run.

“Fred!” I shout, rearing back for another frantic beating.

The door swings wide and Freddie gawks at me. “What?”

My arm is still raised, and I am immensely, immensely pleased when her eyes graze over my bicep, across my shoulders, and then down my chest and abs…

My mouth slides into smirk. I lower my hand and drawl (or attempt to…I’m kinda still panting like a dying dog), “I need your phone.”

“And I need you to put on a shirt.” She pinches her nose. “You stink.”

“Pfft.” She slides her phone from her back pocket. “What’s so important that you can just run the rest of the way to the school and get your phone?”

I go to her phone’s contact list and scroll down to Girard…but my eyes catch on Friedman. I can feel my forehead sinking into a full-on scowl. Since when does she have Todd Friedman’s number? Somehow I hate that douchebag even more now.

“Well?” Fred demands, and I scroll the rest of the way to Michael’s number. Then hitting “call”, I finally peer down my nose and into her eyes.

“The bottle was missing.”

I nod, listening to the phone ringing in my ear. Two rings. Three…

“Holy crow,” Fred breathes. “It hasn’t rained or anything.”

“It was moved.” Six rings and Michael’s voicemail picks up. I end the call, and meet Freddie’s bulging eyes. “Like, the branches and stuff were exactly as I’d left them…but the bottle wasn’t there.”

Her eyes widen even more. “You need to go to the police.”

“What?” I scoff and hit call again. “Why the fuck would I go to the police?”

She flinches at the F-bomb, but doesn’t scold me…and my heart does this little sinking flip at that. She always scolds me for the F-bomb.

“Simon.” She stomps her foot. “Even you can’t deny that this is all kinds of messed up. You find a bottle that proves Mrs. Gupta didn’t die where Luis and James found her—”

“—and then the bottle conveniently disappears.”

Two rings. Three. “Maybe a hawk just picked it up.”

“A hawk.” She plants her hand on her waist and cocks out her hip. Have her hips always been that…defined? “You and I both now how stupid that sounds. You came running here to use the phone because you know how effed up this whole situation is.”

“I’m not going to the police. They already think we’re dicking around. Plus, for all they know, I invented the water bottle.” Six rings and I’m back to Michael’s voicemail. I groan and hang up. “Why isn’t he answering?”

You tell me: How’s NaNo going for you? Even you know you won’t reach the 50K mark, did you at least get some extra writing done this month?

My Writing Process, Or: How I Write A Terrible Book and Then Make It Good Determination no matter what