How I Plan a Book, Part 4: Coaxing Out the Magical Cookies

Read Part 1 in this series: Of Plotters and Pantsers.

Read Part 2 in this series: Before I Start Drafting.

Today’s post on “coaxing out the magical cookies” might be more aptly titled “What to do when you get stuck drafting.” But then again, if you can ALWAYS coax out magical cookies, you won’t get stuck too often. 😉

Disclaimer: This is how I operate. This is also how the author friends with whom I discuss writing craft ALSO operate. I know this because we will call each other in a panic with NO IDEA what to write next…and then we will always give each other the same advice: let go and find the cookie. In this post, I’ll show you how I find the magical cookie. It may not work for you, but I hope it gets your ideas at least flowing.

So to recap from last week: what is a “magical cookie” and why do we want to coax it out?

As mentioned last Friday, Magical cookies are those scenes or snippets or relationships or feelings that make you want to write a story. They are often the juicy little ideas that inspired you to write THIS story at THIS moment.

Now, I will repeat this because it bears repeating a bajillion times…because it’s seriously that important and will help you maintain passion for your project throughout.

Every scene in your story must be a magical cookie scene.

If you don’t have any interest in writing a scene, then that scene DOES NOT NEED TO BE WRITTEN. Toss the idea out the window and go back to the drawing board.

But SOOZ, that’s easier said than done!! If I toss out the idea, I have no way of getting my characters from Point A to Point B.

Ah, but you do, my dear friends. You do, and I will show you how to coax out the next magical cookie in your story.

QUICK! Write down why want to write THIS STORY–the spark that set your brain and heart on fire. And here, I’ll do this exercise right alongside you for my NaNo 2013 project. (Click through to see the image on a larger scale.)

Those three things–the awesome romance, the fun of a teen sleuthing, and the wonderfulness of autumn–are what made we want to write The Executioners Three. Now I’m going to get more specific…

QUICK! Write down the scenes that go along with your inspiration. No scene ideas? What about all those fleeting images or little clips of story that you can’t wait to write? For example… (Click through to see the images on a larger scale.) 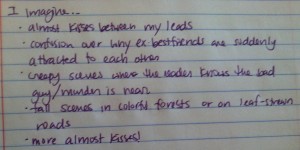 Those scene snippets are my magical cookie scenes. I don’t want to forget the almost-kisses or the creepy murder scenes when I draft because they are what I’m most looking forward to writing.

Before we move on, I’ll give you a second, more complex example for those of you with bigger plots/characters/worlds. (Click through to see the images on a larger scale.) 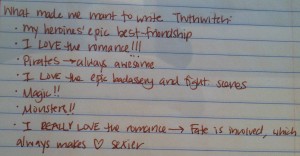 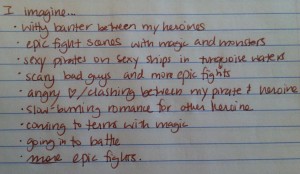 Now all of those magical cookies are going to become very important because they are how you’ll know what to write next.

If you are an outliner, then you might have no trouble knowing what to write next because  it’s on your outline–or on your jerry-rigged, disorganized smattering of plot points. Or maybe the next scene is one you just know has to happen to keep the plot moving (remember getting from Point A to Point B above?).

But here’s the test to give yourself each time you face the next scene:

If you got to the end of that quiz and the answer was, “Then you have a problem,” have no fear! I’m going to help you with that problem. And it all boils down to the Magical Cookies.

First though, LET GO OF YOUR OUTLINE. Step away from it (and everything else you’d planned, from character to setting) and grab your list of magical cookies.

Section 2: For Pantsers or people who “have a problem” in section 1

So get your list of magical cookies. I want you to stare hard at that list and I want you to THINK. If you’re like me, you’ll grab a pen and start writing in your notebook.

Here is an example: I was trying to figure out what should come next in Truthwitch. I had planned on having a ball scene, but I had ZERO DESIRE TO WRITE IT. None, none, none…

So I turned up my music–the music that had first sparked this entire story–and I asked myself, What would make me want to write the next scene? (Click through to see the image on a larger scale.) 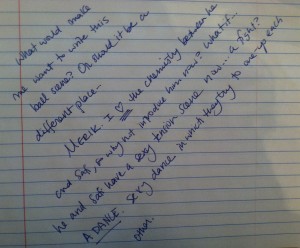 And that was it. Seriously. That was all it took and suddenly the scene’s screenplay exploded out of me. (Click through to see the image on a larger scale.) 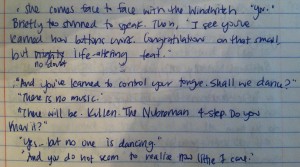 Those are the bones of the scene, and when I sat at my computer, the words flew. All because I had found my magical cookie: the love interest and the sexual tension.

Of course, it’s not always so easy. The ideas don’t always come so quickly or so vividly. And those times are when I rely on my Wikipedia-Spotify-Pinterest trio. I’ll look at pictures, listen to music REALLY LOUDLY, or browse through Wikipedia links until something clicks.

But I never abandon my list of magical cookies. Because more often than not, the answer will be on that list–and then a Pinterest image will help flesh out the answer into a full scene. Or an epic playlist will help bring a magical cookie idea to vivid life.

And of course, when that spark finally ignites into a full scene idea, you can bet I have my notebook and pen handy so I can scribble down the scene-screenplay as quickly as possible.

Now, I want to return to my earlier made-up complaint from you: But SOOZ, if I toss out the idea, I have no way of getting my characters from Point A to Point B!

And here’s what I say: Sometimes–most of the time, in my case–the reader does NOT need to see how a character got from Point A to Point B. If Point B is a magical cookie but the stuff needed to get a character there is not, then DON’T WRITE THAT IN-BETWEEN STUFF. Write a quick transition and then drop us right into the Point B magical cookie scene.

Only give us the magical cookies. Always. If you don’t love writing the scene, you can bet the reader won’t love reading it.

If you still absolutely have to have the in-between stuff, then turn that in-between stuff into a magical cookie. Find something that gives it heart and makes you want to write it. Maybe it’s just a matter of inserting the love interest into the scene (as it was in my instance with Truthwitch) or maybe it’s something a bit more complicated. But if you think about it long enough and hard enough–and you don’t forget the parts of the story that excite you–you’ll find the answer. We all do.

Questions? I’m sure you all have a million. So go! Or you tell me: what do YOU do to figure out the next scene in your story?