Increase Your Writing Productivity (part 2): the power of ritual 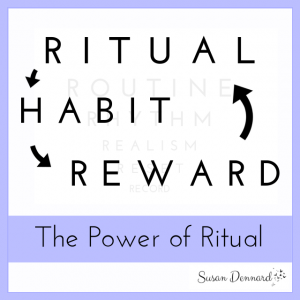 Last week, I introduced my Productivity Pyramid (that isn’t a pyramid at all, but I just can’t let go of the lovely alliteration from 2 p’s, you know?). This week, I’m focusing on what I think is the most important part of that pyramid–the base upon which all the other R-words are built.

Yeah, that’s right: Ritual. A ritual is (according to Merriam-Webster) “an act or series of acts done in a particular situation and in the same way each time.”

Rituals are INCREDIBLY powerful tools, and they can be the key to unlocking some great habits.

But wait, you say, I thought we were building rituals, Sooz! Make up your mind!

A habit is (again, according to Merriam-Webster) “an acquired mode of behavior that has become nearly or completely involuntary.” So for example, I have this awful habit of putting on lip balm whenever I’m nervous. I’m pretty sure I don’t even need the stuff, but whenever I get a bit stressed, I’m grabbing for it from my pocket.

I have another habit, though, that’s a good one: I can easily fall into creative flow. Like, as long as I have the right set of conditions–the right ritual to start–I can sink into a productive whirlwind right away.

And that’s our goal here, guys: We want to build a ritual so that productive flow becomes a habit.

Now what do I mean when I say productive flow? I mean “the mental state of operation in which a person performing an activity is fully immersed in a feeling of energized focus, full involvement, and enjoyment in the process of the activity.” (definition from Wikipedia)

For me, productive flow = creative flow. When I’m writing in a mental state of creative flow, the hours ZIP by. I feel great, I love what I’m doing, and I come out feeling energized. That energy is a great reward, so I want to make sure I feel it again the next day…and the next day and the next.

But I wasn’t always this way. In fact, it used to be a real challenge for me to get to a creative free-fall state. I needed the “perfect conditions” or “inspiration had to strike” or some other magical voodoo star-alignment had to happen. However, just as I learned how to build the habit of productive flow, you can learn too. 🙂

As the amazing John Cleese put it:

According to Charles Duhigg’s fabulous book The Power of Habit, there are three components to a habit: the cue, the routine, the reward. Essentially, a cue triggers you to behave a certain way, and then after the behavior, you get some sort of reward. That reward reinforces your habit so that it reoccurs each time you’re exposed to the cue.

Here, watch this video and you can understand.

Of course, Duhigg is talking about breaking habits (which is a useful thing to be able to do), but what we want to do here is start a new habit. We want to make productive flow a habit. And we’ll do that by tapping into what he calls the “cue.”

So just as my anxiety is a cue for grab lip balm from my pocket, I have a cue that triggers me to start writing. My cue is a ritual–a specific series of acts and conditions–and when I enact my ritual, it gears up my brain for work. And not just work, but creative, productive, focused work.

Sounds pretty fantastic, doesn’t it? Well, I’m not gonna lie: it is fantastic. And I’m not the only one who has a cue. A close author friend of mine always drafts on her laptop while sitting on her couch. That location (the couch) and the prop (her laptop) tell her brain it’s “go time”.

I have another friend who uses legal pads. When she sees the legal pad (her prop) sitting on the desk (her location), her mind slips into creative flow immediately. But it’s not just my group of writer friends who rely on cues to trigger productive flow. Here are some famous authors who have tapped into the power of ritual:

Recently I was talking to a writer who described something she did whenever she moved to her writing table. I don’t remember exactly what the gesture was–there is something on her desk that she touches before she hits the computer keyboard–but we began to talk about little rituals that one goes through before beginning to write. I, at first, thought I didn’t have a ritual, but then I remembered that I always get up and make a cup of coffee and watch the light come. And she said, Well, that’s a ritual. And I realized that for me this ritual comprises my preparation to enter a space I can only call nonsecular… Writers all devise ways to approach that place where they expect to make the contact, where they become the conduit, or where they engage in this mysterious process. For me, light is the signal in the transaction. It’s not being in the light, it’s being there before it arrives. It enables me, in some sense. – Toni Morrison (from The Paris Review, via Daily Routines)

When he first started writing, Grisham says, he had “these little rituals that were silly and brutal but very important. The alarm clock would go off at 5, and I’d jump in the shower. My office was 5 minutes away. And I had to be at my desk, at my office, with the first cup of coffee, a legal pad and write the first word at 5:30, five days a week.” –San Francisco Chronicle, via Daily Routines)

“I have a glass of water or a cup of tea. There’s a certain time I sit down, from 8:00 to 8:30, somewhere within that half hour every morning,” he explained. “I have my vitamin pill and my music, sit in the same seat, and the papers are all arranged in the same places. The cumulative purpose of doing these things the same way every day seems to be a way of saying to the mind, you’re going to be dreaming soon.” (from Haunted Heart: The Life and Times of Stephen King, via Daily Routines)

Notice that each author has are a specific sets of circumstances, and I’ve divide these “ways of approach” into three categories:

My personal ritual requires 2 props: a spiral-bound notebook and a pen. That’s it. I don’t need a special location or a special action. As soon as I see the ruled paper, I am ready to write.

That said, in the past few months, I’ve honed my ritual to try and take my creative flow to a new level.

I’ve added an action (making a cup of coffee), a location (an old 1960s couch in my office), and a third prop (my headphones & music). Now, when I have all five components of the ritual–notebook, pen, coffee, couch, music–my brain is instantly cued that it’s creation time! Hours will fly by, and I’ll come out of the writing/revising/brainstorming session feeling like I can take over the world.

Crafting Your Own Ritual

The key to tapping into your own habit of productive flow is to figure out WHAT your ritual/cue is. So take a close look at your current creative time. Is there something you ALWAYS do before your most productive sessions? Even the smallest thing might be crucial to getting your brain in the zone.

It took me years to recognize that I am a tactile writer. I can’t work on a computer–I prefer to write by hand, to revise by hand, and to generally create by hand. In all likelihood this is because I started writing before I had a computer. Not only that, but I usually wrote my stories while I was in class. I would scribble new worlds and characters into the margins of my notes.

And guess what–I took notes in spiral-bound notebooks. In other words, I cultivated a ritual for creative flow back when I was 13–without realizing I did it, of course–and I still react to those same powerful cues.

Of course, if you don’t have a ritual, you can CULTIVATE one by creating a specific set of circumstances–specific props, locations, and actions. If you enact these specific actions with specific props in a specific location every time before you start your work, it will teach your brain to react as you want it to react.

Basically, you are Pavlov’s dogs right now, and you need to make your own bell.

In fact, here’s an example of what I’d call a pretty complex–though clearly effective–ritual:

“Maya Angelou, author of I Know Why The Caged Bird Sings, rises at 5am and checks into a hotel, where staff are instructed to remove all stimuli from the walls of her room. She takes legal pads, a bottle of sherry, playing cards, a Bible and Roget’s Thesaurus, writing 12 pages before leaving in the afternoon and editing the pages that evening.” – Shortlist.com

Pretty crazy routine, no? Yet 12 pages a day is insanely productive, and you could easily have a draft in a month at that rate!

The Power of Ritual

Hopefully I’ve offered you enough incentive to look at your own rituals and habits. The great thing about this tool–what really makes ritual incredibly powerful–is that you can it to trigger your brain for any new habit. Want to start jogging in the mornings? Try putting your shoes and workout clothes on the floor beside your bed. Then, when you wake up, you’ll step on them…and then put them on. Once you’re dressed to impress, there’s nothing to stop you from heading out the door to run. If you do this every morning, eventually, the ritual of seeing your clothes/shoes will cue you for the habit of a morning jog.

The next post takes us to the next step on the Productivity Pyramid–routine—but in order to effectively tap into the power of routines, we need to first hone our rituals and habits.

So you tell me: What rituals do you have that prep your brain for productive flow? Or what rituals would like to cultivate?