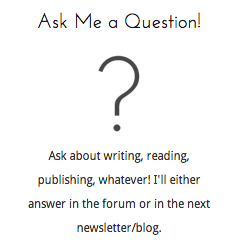 I sent out a call last week for writing questions, and I thought I’d answer 2 today. (Thank you to everyone who sent questions!!)

…the problem is, I actually live in another country, and I’d be trying to get published in an English speaking country. Can this happen? Have you ever heard of it? Will agents only accept manuscripts that come from people who speak english as their first language?

Awesome question, and one I’m sure many of you are wondering about.

Short answer: Yes, you can most definitely do this! 🙂

Long answer:  You can publish in an English-speaking country, no matter where you’re from/live. While it can make things difficult when it comes time to promote a book, having an author live in a different country is NOT a deal-breaker for agents or publishers.

As for your next question, agents will definitely accept manuscripts from non-native English speakers (as long as your English is very, very strong). And yes, I have heard of this happening. 🙂 I knew a German girl who sold her book in the UK, and her first language was German.

THAT SAID, I’m not sure you should mention in a query letter that English isn’t your native language. It might end up biasing an agent against you simply because–despite an impeccably written letter–the agent may assume your English isn’t strong.

Let your letter and sample pages stand strong, and then–if you want–you can tell an agent/editor AFTER signing/selling that English isn’t your first language.

I hope that helps, and feel free to ask more questions in the comments or in the forum!