As I recently discussed in a Misfits & Daydreamers issue, whole-assing (a.k.a. full immersion) is the only way I can get a book written. I need to fall so deeply into the story that no outside distractions can…well, distract.

I’m not the only author who feels this way. In fact, I’d say that the #1 complaint I hear from my fellow writers is that email, Twitter, Facebook, Tumblr…basically, The Internet, is a black hole that both sucks away attention and also sucks away motivation.

Don’t get me wrong: I LOVE me some social media–and nothing gets me more excited than Twitter conversations about Vampire Diaries. But, whether we realize it or not, all those interactions stress us out.

It’s all part of what’s called the Zeigarnik Effect, which basically says that unfinished tasks cause stress and intrude into our thoughts. So for every unanswered email, tweet, text, etc. that you’ve ever read, your brain is carrying around STRESS. And until the messages are answered, that stress will build up and take away precious attention for creativity.

The brain likes finished tasks–it can’t let them go otherwise. So until you ANSWER or DEAL WITH all those social media messages, your brain can’t relax. It can’t unplug.

But hey, if you don’t even know the new email is there, then whoa! Suddenly your brain has some freed-up space.

But it’s not just messages that cause stress–it’s ANY to-do item that’s unfinished. Those packages that still need dropping at the post office. Those blog interviews you never got around to finishing or ARCs that you totally meant to read/review…

So how do we fix all this stress? We finish, we eliminate, and we stop taking on more.

As Jeff Vandermeer says in his awesome Booklife:

…I am not the kind of person whose book promotion/Internet brain is interwoven with my creative brain. The two are separate. To summon one I must banish the other. To go from being in the moment while writing in the morning to this other thing in the mid-afternoons–this person who fields requests for interviews, fan mail, production questions on forthcoming books, and all the other things a writer or other creative person deals with outside writing–to do this, I must make a transition. I cross the border into another land, assume another identity. Because, for me at least, I am becoming someone else entirely.

This is true guys. So true.

I am both Writer Sooz who never bathes and wears the same disgusting sweatshirt day-in and day-out…And I’m also Social Sooz who loves to talk to other writers and readers, who gets all glammed up for an event, and who could spend HOURS on Twitter discussing Henry Cavill’s perfect jawline. But the two sides of me don’t mix too well, and when Social Sooz takes on new tasks, then those unfinished jobs (or unanswered messages) prey on Writer Sooz’s creativity.

Hence me making Fridays my “administrative day.” This has been working quite well for me thus far. BUT, when it comes to drafting an entire book from scratch and also on deadline, I have to allocate my time in an even stricter way. I can’t just make Friday’s my day for Social Sooz. I can’t just try to avoid Twitter and Pinterest for as long as my self-control lasts (ungh, I love them both so much….). And I can’t just put everything on hold to travel for an event.

Somehow, I need to give Writer Sooz all the time and distraction-free space that she (er…I?) needs to write a book.

So, after chatting with Sarah about this, we decided to take December and January “off.” We’re both on deadline and we’re both pretty empty on the event front–which means, this is the PERFECT time for us both to try to whole-ass our way through some first drafts.

What we’ve decided to do–at least for now–is to assign strict “No Internet” hours for each weekday. We’ve settled on 12PM – 4PM. During those four hours, we’ve agreed we WILL NOT:

In fact, unless there’s some pressing research need, we won’t get on the internet AT ALL from 12 to 4 every weekday. Personally, I’m hoping the less I’m on, then the less I’ll even want to be on… (Bye-bye Stefan vs. Damon discussions…at least for now.)

Sarah and I hope that, at the end of our Detox December and Rejuvenation January, we’ll not only each have a first draft (or a large chunks of a first draft) completed but that we’ll feel more connected to our writing. We’ll love our stories and our characters, we’ll find creative flow is easier to achieve, and our Writer Selves will have had a much needed “vacation” from our Social Sides.

Now, since December tends to be a time of reflection, and since January is often a time for setting new goals, we thought we’d invite YOU ALL to join us in our creative immersion time! We’ve got a little image you can pin on your Twitter feed or add as your Facebook status…or put anywhere, really! It’ll let people know you’re taking a little break (but will return!), and it’ll let us all join in the #DetoxDecember and #RejuvJanuary together! 🙂 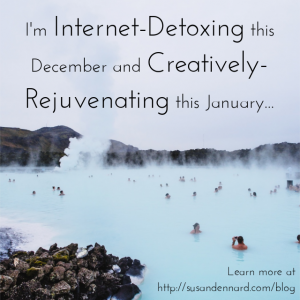 Alrighty, guys! I’ll see you on the 2015 flip-side! (There will be a newsletter on Friday, and a few more throughout this time. Plus, I’ll still be on my social media outlets…just not as much. PEACE!!)