Steampunk — what is it? 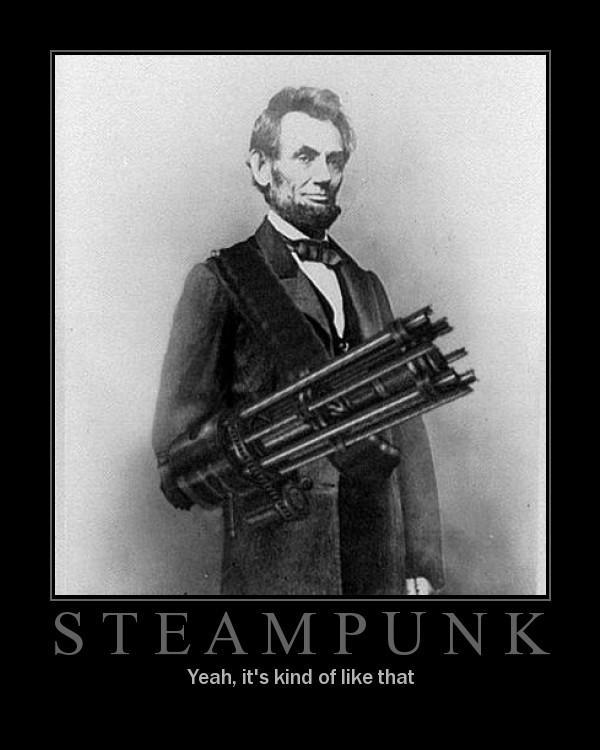 Steampunk started with steam — no surprise there right?  Steam engines, Victorian England, and inventions beyond true technology.  Think Jules Verne and H.G. Wells.  Or, in more modern arenas, think The Difference Engine, The League of Extraordinary Gentleman, Steamboy, or the new Sherlock Holmes.

But steampunk moves beyond England.  It also includes the American frontier a là The Wild, Wild West or Boneshaker; the samurai world of Japan a là Robotika or Lolita fashion; and worlds that aren’t our own, like Perdido Street Station or The Golden Compass.

Counterintuitive as it is, the steampunk world can also leave behind the steam age.  Firefly, a rip-roaring Western set in the distant future and on distant galaxies, may seem far removed from the usual steampunk associations, but nonetheless, ask any steampunk fan, and they’ll list Firefly.

Or how about Neal Stephenson’s The Diamond Age, a cyperpunk story set in futuristic Shanghai?  I just labeled it as cyberpunk, but the presence of “New Victorians” in the story adds a definite steampunk flare.

And here’s where it starts to get even more confusing — subjective even.  What really makes a book steampunk?  Maybe it’s some of the more common elements:

Then again, not all steampunk will have all (or even any) of those elements…  So many maybes — it’ll set your mind reeling, huh?  Well, rather than leave you on this intangible and even elusive sense of what steampunk is, I’ll leave you with my own definition.

Steampunk is, more than anything, a feel.  It’s gritty, it’s dark, and it’s sometimes horrifying.  It gleams like brass but is dulled by the sepia of old photographs.  It’s action-packed and the stakes are high — like end-of-the-world high.  It’s filled with brave heroes and even braver heroines.  And, above all, steampunk is hang-ont0-your-monocle fun.

Want to give the steampunk genre a try?  Ceheck out this list of books from Goodreads.  Or, take a gander at a few of my favorites — books that fall into my own steampunk definition.

Finding a Critique Group, Critique Partner, or Beta Reader The pleasure from praise (or) Authors are people too