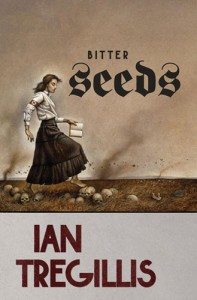 Bitter Seeds, a debut novel by Ian Tregillis, takes you to WWII, but to a WWII in which Hitler has a super-hero fighting force.  Klaus (my favorite character) is the invisible man with some arrogance issues and a down-right terrifying sister named Gretel. Gretel’s power?  She can see into the future.

Then there’s a flying man, a man of fire, an ethereal, disappearing girl, and set of twins who are telepathically linked for long-distance communication.

The team is dangerous, and not just from their powers, but from the complete absence of any mental stability for any of the members.  Except for maybe Klaus, whose character develops throughout the story — develops into a person I kinda like.

On the British end of things, enter Raybould Marsh.  He’s a tough spy with more skills than 007, but with no clue how to defeat this new team of Hitler’s.

I loved this book! It took some time to orient myself in the story, but once I grasped the stakes, the characters, and the creepy villain-behind-the-scenes, I was hooked. While a brief part in the middle suffered from a few abrupt scene changes that left me slightly disoriented, it hardly detracted from my overall enjoyment of the book.

Bitter Seeds is a romp through WWII with mystery, horror, and fantastic plotting. I went into it with only the haziest inkling of story, and I came out a series addict.  Yargh!  Now I must wait on the sequel, The Coldest War. I will purchase it the instant it’s available.

Oh, and just so you know, there is only one other sequel that I will buy as soon as it gets out: George R. R. Martin’s Dances with Dragons (duh!).  And everyone knows that George R. R. Martin’s Song of Ice and Fire series is the Best Written Since The Dawn Of Time.  So clearly, if the only other sequel I’m salivating for is Bitter Seeds, then clearly it’s a kick-butt start to a kick-butt series.

If you like steampunk, adventure, or twisted tales of mixed up loyalties, then this is the book for you.  Enjoy!

Researching your novel (part 1) What a coincidence!