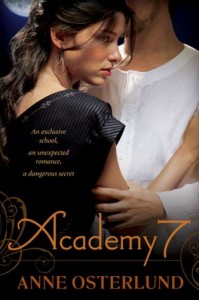 On Anne Osterlund’s site, she describes her novel Academy 7 as Stars Wars meets The Outsiders.  I like The Outsiders; I obsess over love Star Wars; and I thought “cool, I’ll read that next.”

Yeah, it’s not like The Outsiders.  It’s nothing like Star Wars.  I’m not entirely sure where Osterlund even came up with that comparison…

Alas.  It set me up for disappointment, and about half way into it, I had to re-calibrate my mind to keep my temper in check.  This novel is really about two people with troubled pasts who are thrust together.

Aerin is on the run, but from what, we don’t know.  She’s picked up by an Alliance ship (the Alliance is an intergalactic government), and the captain sends her to school — Academy 7.  Dane is a rebellious son from a wealthy home but with a major chip on his shoulder.  He’s also sent off to Academy 7.

Aerin and Dane spend time together by necessity, and in doing so, they develop a friendship.  And, as the story progresses, their secrets surface — secrets that connect them to each other in ways they never could have imagined.

It was an entertaining read, though the characters’ behavior often came across as forced (especially Aerin’s).  I overlooked that though, and kept turning pages to find out what the pair’s secrets were.  I also kept turning pages in hopes of a romance.  (Sadly, the romance really only happened on the very last page.  Poo.)

If you like teenage angst, shady pasts, a touch of mystery, and sci-fi backdrops, then this just might be the book for you.