The Graveyard Book: a book recommendation 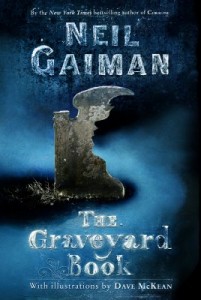 Not since Peter S. Beagle’s The Last Unicorn has a book touched me in quite the same way as Neil Gaiman’s The Graveyard Book.  It’s magical.  It’s sweet.  It’s funny.  It’s wise.  It’s powerful.

When the Owens family is murdered one night by the man named Jack, one tiny member manages to escape.  The Owens baby wanders from his crib, from the house, and into a nearby graveyard.  The ghosts of said graveyard take him in and decide to raise him as one of their own.

“He’s out here, somewhere, and he wants you dead,” she said.  “Him as killed your family.  Us in the graveyard, we wants you to stay alive.  We wants you to surprise us and disappoint us and impress us and amaze us.”

Each chapter describes a passage in Bod’s life, from early childhood up to early manhood.  It is basically a retelling of Kipling’s The Jungle Book, and yet somehow I didn’t figure that out until Chapter 4.  And amazingly, I prefer The Graveyard Book to The Jungle Book — and I really love Kipling (my cat is named Mowgli).  I’m not even a big fan of Gaiman, but this novel is simply amazing.

“About fifteen, I think.  Though I still feel the same as I always did,” Bod said, but Mother Slaughter interrupted, “And I still feels like I done when I was a tiny slip of a thing, making daisy chains in the old pasture.  You’re always you, and that don’t change, and you’re always changing, and there’s nothing you can do about it.”

So, yeah.  There’s not much else to say except to urge you to buy this book.  Read it for yourself, read it with your children, share it with everyone you know.