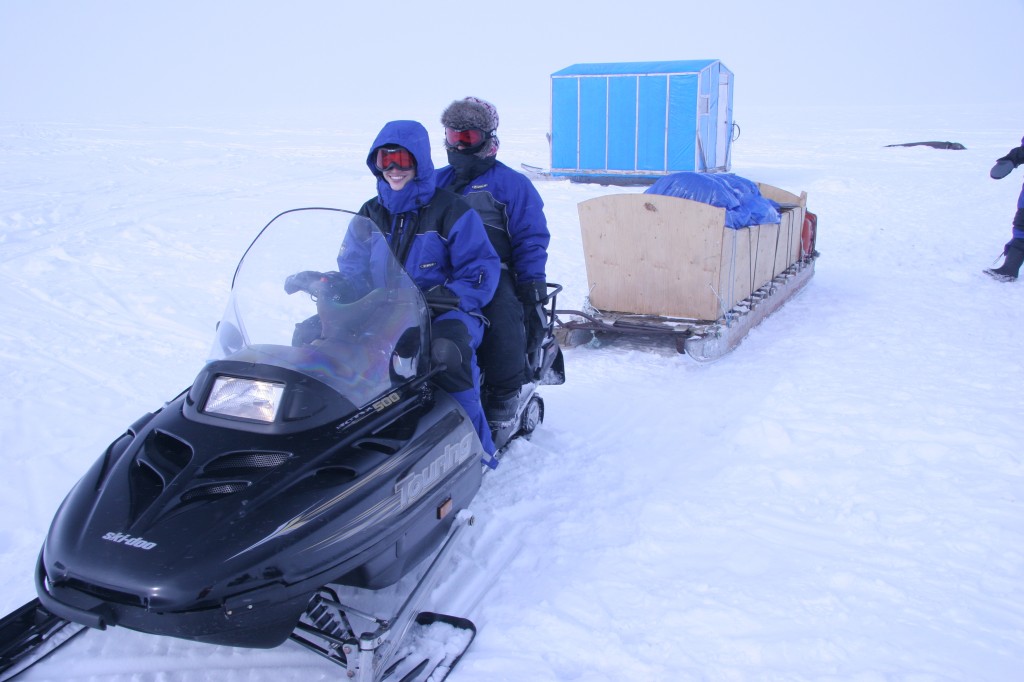 After reading Life As We Knew It, I picked up an old journal of mine.  Some of the experiences in that novel were markedly similar to what I went through in the Arctic doing my MSc field work.  The journal was kind of entertaining to read — at times moving, but mostly just funny — so I thought I’d share an entry.

Just to preface this entry, I was with 3 other scientists & 2 Inuit fisherman in Cumberland Sound, Nunavut.  We camped on the sea ice about 50 miles from “civilization” (an Inuit hamlet called Pangnirtung), and our daily routine was to fish through a hole in the ice.  I was studying Greenland halibut (a.k.a. turbot) and the other scientists were studying Greenland sharks.

A Wussy Scientist in the Arctic with some Inuit Fisherman

I am writing by lantern light in our shack.  Bailey and I are sharing a shack, Carlos and Aaron are in another, and Jesse and Ju are in the third.  My fingers are stiff from the cold.  I’ve never experienced weather like this — at times it’s so dry you can’t breath, at other times it’s so damp your clothes freeze to you, and then it’s always, always bitterly cold.

We rode the snowmobiles 2 hours today to get to this fishing site, and I’m still frozen from it.  Unless my body is active, I can’t keep my core warm.  I don’t have the nice compact body of an Inuit…  Long, scrawny limbs weren’t meant for Arctic life.

We had an adventure today.  Actually, “adventure” makes it sound fun, like Space Mountain or something.  It wasn’t fun — it was really, f***ing scary.  Our snowmobiles, komatiks, and shacks got stuck in the slush.

When the sun shines (as it did today), the first foot of snow melts and mixes with the other snow.  It makes this deep slush that’s like quick sand.  It sucks everything in — our snowmobiles, our boots, our equipment, our housing, our sanity…  It took us about three hours of heaving, ho-ing, shrieking, and shoving our hands in the snowmobile exhaust (for warmth) to get all our sh** out.  I was really scared we’d be stuck for good and have to call a helicopter for help.  It wasn’t the best way to start our field season.

When we finally did get out of the slush, we were all really cold.  Jesse and Ju [the Inuit fishermen] had frostbite on their cheeks (they don’t wear anything to cover their faces!), but they said that was normal.  Maybe it is normal for the Inuit, but it still looked awful.  Their brown cheeks and noses had black, crusty patches.  They had white marks all over their faces too, and they told me that was fresh skin from the last round of frostbite.  WTF?  I’ll keep my face mask on, for sure.

Bailey and I have a “pee bucket” inside our shack.  Since we’re the only girls, we don’t feel too keen to pee outside.  To be honest, I’m not too keen about literally freezing my ass off just to take a leak.  This little bucket works fine for me.  We fill it with snow, and after we pee, we dump the snow outside.  I like to think we’re feeding the ice algae with all that yummy nitrogen. 🙂

There’s so much snow and ice.  Because it’s the ocean, it’s completely flat.  I can see for miles and miles when the weather is clear.  The mountains look tiny, but they’re visible.  That Aristotle guy must have been purty smart to figure out the earth is round.

I’ve got a head-cold, so Aaron keeps loading me up on medicine.  This isn’t a good place for a weakened immune system.  I don’t feel that bad (thanks to all the daytime cold tablets), but I am congested.  I have to breathe through my mouth, which is disgusting because my face mask freezes where the saliva collects.  And, snot keeps dripping out of my nose and forming into these viciously sharp crystals.  They stab me, and when the mask rubs, they scrape off the skin.  Ow, and totally gross when you think about it.  Killer snot.

I wanted to write so much more, but I’m tired, cold, and my glasses keep freezing up.  Good night.

If you want to see the Dirty Jobs episode about us, you can check it out here:

(and no, I’m not in the episode.  Discovery Channel was only willing to take 3 scientists.)

It’s strange for me to read the journal or look at the photos or watch any video footage because it all seems so surreal now.  When I’m back in the “real world” with a heater, a bed, fruits and vegetables, noise, smells, and everyday stuff, I can’t even recall what it was like to live with nothing in the middle of nowhere with no one around…

Life As We Knew It: a book recommendation Travel Diaries: Arctic Adventure 2