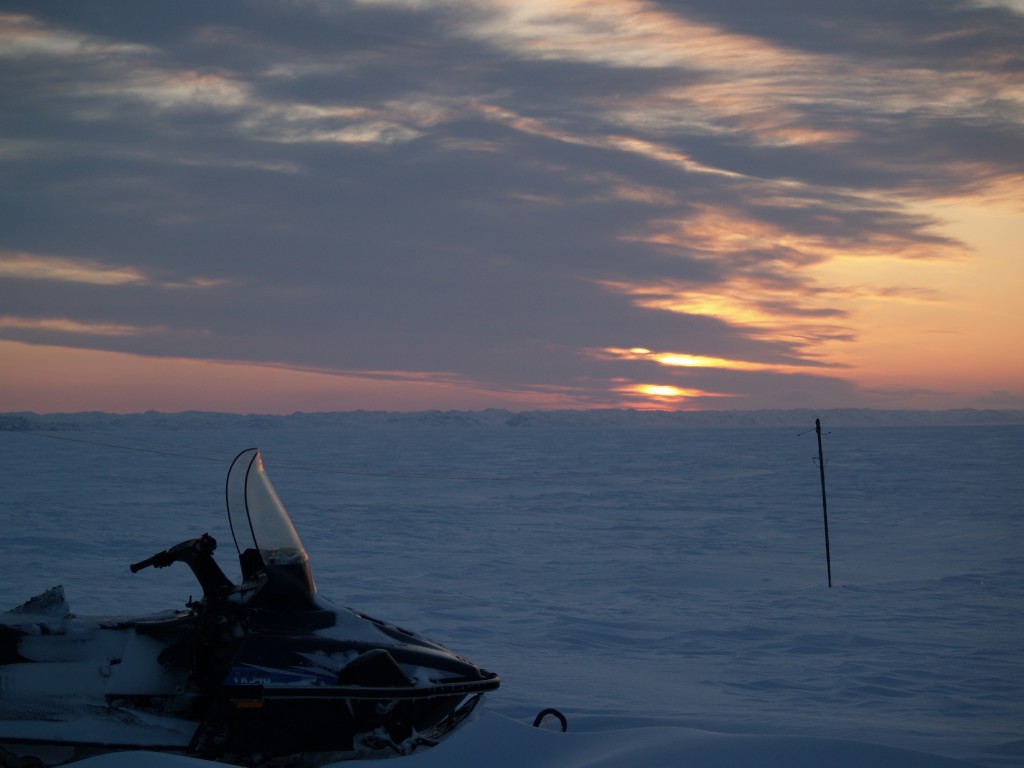 The Wussy Scientist Sees Something Pretty

I smell like shark guts.  Oh well.  It’s only 2 more days until I get to shower.  That’ll be nice.

I’m frozen right now.  It’s the coldest temperature yet, and we skipped dinner.  My inner furnace won’t turn on with out fuel.  It probably doesn’t help that I spent 30 minutes lying in the snow and oggling the sky.  It was just so beautiful…

The Northern Lights were out tonight, and there were no clouds to hide it.  And there were thousands upon thousands (and them some more) of stars speckling the black sky.  I even saw a shooting star, though it was quickly lost in the layers of the aurora.

I wish I could describe what the aurora looks like.  It’s so many colors, and they cluster together in waves at the top of the sky — like they’re reaching up to God.  Oh, and how the colors dance!   They shoot and stream and roll across the sky, and behind them the stars keep twinkling.  I felt like I was watching a story — my brain kept seeing shapes.  First a dragon then a swan and then a koi, and finally a young maiden who floated away.

If I looked South, I saw the aurora and stars.  If I looked North, I saw the moon.  It was just as beautiful to watch, hovering above and illuminating our little camp.  The moon’s brightness turned the shacks into silhouettes, and the “windows” of our shacks glowed and steam poured out of them.  Only a handful of stars were powerful enough to shine through the moon’s glow.  It was like something from a painting.

And it was all so beautiful and so still!  No noise, no movement.  The only coherent thoughts I was able to form were, “Thank you, thank you.”

I think this must be what it feels like to be on the moon.  You bounce when you walk because you wear so much gear, there’s no sound except your own breathing, and you’re the only living thing for miles.  Okay, so I’m not the only living things for miles.  There are thousands of fish and brittle stars and amphipods and snails and shrimp and kelp and sharks all hanging out in the ocean 3 feet below me…

I’m going to eat a piece of cheese now.  It’s like a cheese popsicle, all frozen and crunchy.  I hope that gives me enough calories to warm me while I sleep.

Travel Diaries: Arctic Adventure Before I Fall: a book recommendation