My husband is French.  As a result, our childhoods were markedly different.  My cultural identity is American, his is French, and there are some things we will just never understand about each other.  He will never laugh at sex jokes, and I will never enjoy stinky cheese.

What I’ve found most hilarious are my attempts to explain some aspect of North American pop culture that everybody knows.  TV shows, for example.  These are some real head-scratchers:

Even my eyebrows arch at this one — and I love Rocky and Bullwinkle.  But seriously, just listen to the premise: 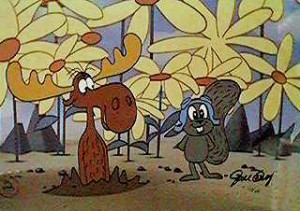 So, there’s this moose, and his best friend is a flying squirrel…  Yeah, and they run around trying to escape and/or foil an evil Russian couple.  And during the episodes, there are some side shows with characters like Dudley Do-Right (a Canadian Mountie) or Mr. Peabody (a time-traveling, talking dog).  Uh…

Then we put all that together, shake it four times, recite a prayer to the Sun God, and something funny will come out.

Whenever I try to describe this show to the Frenchman, I end up shrieking the theme song at him.  It’s like if I sing the lyrics at him often enough and loudly enough, one day he’ll just get it. 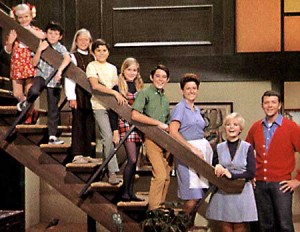 Me (singing): Here’s the story of a lovely lady who was bringing up three very lovely girls! All of them had hair of gold, like their mother The youngest one in curls!  Here’s the story of man named… ::singing stops:: Wait — why are you looking at me like that?

Me:  What do you mean you don’t understand?  I believe I explained it very clearly in my melodic synopsis.

Him: Yeah, I know, but no matter how many times you sing it at me, Sooz, I still have no idea what you’re talking about.

Me:  Then listen harder, Frenchie.  Sheesh.  Let’s try this again.  ::singing resumes:: Here’s the story of a lovely lady…

Although, if you think about, do you even understand the Brady Bunch?   The show is about a bizarre family, their maid, their butcher, and some really crazy bell-bottoms.

This was a topic of discussion in one of my other posts.  How do you explain this show?  It ends up sounding like Survivor or Lost with no budget. 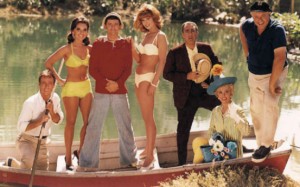 Um, there are these people stuck on island.  They all have different skills…  Er, wait.  Only one of them has skills.  The rest of them just look pretty, argue, or get into some sort of outlandish trouble on every episode.

Oh, and then the Harlem Globe Trotters show up.

The Frenchman actually was familiar Herbie.  Sort of.  The exchange went like this: 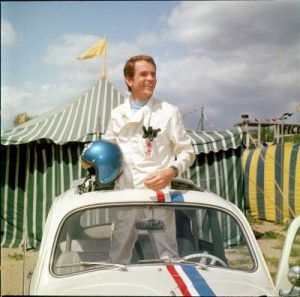 Me: Oh look!  A Lancia.  Herbie fell in love with a Lancia.

Me: Herbie.  You don’t know Herbie? Herbie!?  Come on!  How is this marriage ever going to survive if —

Him: Why don’t you just tell me what it is and stop being melodramatic.

Me:  Yes, I suppose I could try that.   Now listen carefully.  Herbie was a VW bug with feelings.  He was like a person.  They called him the Love Bug.

Him: Oh God.  That. ::rolls eyes and sighs heavily:: Americans are so weird.

Pretty much nothing with Dean Jones made it France.  Their loss.  I mean, do you know anything better than That Darn Cat?  The Ugliest Dachsund?  The Million-Dollar Duck?

That’s what I thought.

Anything by Dr. Seuss

Yeah, you try to explain the Grinch.  Or Sneetches.  Let me know if you come up with anything comprehensible.

These Cultural Riches may never have crossed the Atlantic, but even more perplexing are the things that did make it over the pond.  The Frenchman knows all about these:

The Six Million Dollar Man  (and The Bionic Woman)

Saved by the Bell