The Native Star: a book recommendation 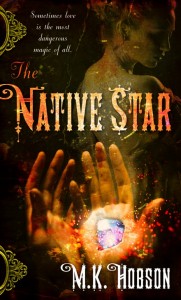 I happened upon M.K. Hobson’s The Native Star quite by chance, and as a steampunk fan and steampunk writer, I gave it try.

Then I fell in love — with the world, with the main character, with the contagonist, with the plot…

Emily is a California backwoods witch trying to scrape up enough cash to buy her foster father’s medicine and keep the two of them fed.  When the mine near her village suddenly loses control of its zombie-miners, Emily and the local warlock named Dreadnought (he’s a city prig with too much education and a high opinion of himself) head up to the mine to check it out.

While there and battling the zombies, a glowing stone embeds itself in Emily’s hand.  Next thing she knows, she can’t do magic and she’s wanted by all sorts of sinister folks — from President Grant’s warlock secret servicemen to a shady group of Russian scientists to anti-magic Baptists.

Though she doesn’t like Dreadnought, she’s go no choice but to head east in search of someone who can get that blasted stone out of her hand.  Especially since it looks like the stone is ripe to explode, and it won’t kill just Emily — it’ll take down everyone.

Oh my gosh, did I say I love this book?  Did I mention that?  I read it in two days and couldn’t stop thinking about the novel for days after that.  Excitement, mystery, fantasy, and romance abound!

I’d never heard of Hobson before this book, but I will keep an eye out for her future publications.  This lady has skill, and I love that she’s coined a new genre term:

Wicked, eh?  If you see this novel, scoop it up as fast as you can.  You won’t be disappointed.

Music for the Masses The Cybils 2010