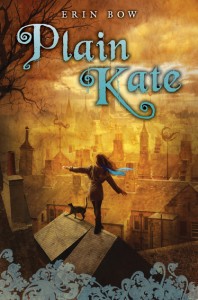 I picked up Erin Bow’s Plain Kate after hearing it compared to The Last Unicorn (which, as you probably know by now, I’m kinda sorta obsessed with).  Though it didn’t ring in my heart quite as true as The Last Unicorn, Plain Kate was a beautiful read with fable qualities and a spine-tingling creeeeeepy-factor.

Plain Kate is young girl with an unsurpassed skill for wood-carving.  She and her father — a master carver himself — live in a small village far-removed from everything.  When a strange sickness decimates the village and her father too, Plain Kate finds herself homeless, alone, and suspected of witchcraft.  After the village turns violent and tries to kill her, Plain Kate makes a deal with a real witch: he’ll take her shadow in exchange for her deepest wish.

As Kate wonders the countryside with her talking cat, Taggle (her deepest wish turned out to be rather unexpected — even to herself), she sees her shadow slowly fading.  Worse, everyone she passes is either dead or wasting away from a new disease.  This ghostly disease was sent by the witch who took her shadow, and now, if Plain Kate doesn’t somehow get her shadow back, she’ll become a victim of this ghostly disease herself.

Like I said, Plain Kate was a beautiful read.  Ethereal, haunting. It came as not surprise to learn that Erin Bow is a poet — she’s deft at weaving words. (Though I did get overwhelmed on several occasions by the over-abundance of similes and metaphors.)

The only reason I gave Plain Kate 4 out 5 stars rather than a full 5 was because it took me almost half the book to become fully hooked by the story.  It wasn’t until the suuuuper scary ghost-thing showed up that I started to flip the pages faster.  Before that, I was wondering what the story actually was…

All in all, it’s a good read for adults, teens, and kids alike.  Part fairytale, part ghost story, part coming-of-age fiction, I recommend you head to the nearest library or bookstore and check it out!