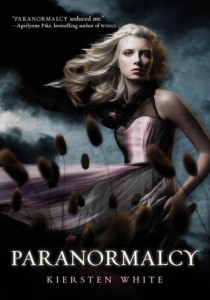 I finally read Kiersten White’s Paranormalcy, and I finally learned what the hype is about.

IT’S AWESOME.  The main character is just so lovable — you can’t end up adoring the book too!

Evie, a spunky teenager with a pink taser named “Tasey”, has the ability to see through paranormal glamours.  She can tell who’s a vampire, a werewolf, a hag, a faerie, and the list goes on.  Because of her unique ability, she’s also a key employee for the International Paranormal Containment Agency (IPCA).  The IPCA’s mission?  To “bag and tag” paranormals around the world to keep normal humans safe.

But then one day, a strange paranormal named Lend is locked away at the IPCA, and he’s, well…  Special.  Not dangerous at all.  As Lend and Evie build a friendship, the world outside the IPCA is sucked into chaos.  Someone (or something) is targeting and killing paranormals all over the globe.  And that someone is really interested in finding Evie — because Evie is the only person on the planet with the power to protect the paranormals.

GREAT BOOK. Evie is just the most lovable main character, and Lend is swoon-worthy sweet.  The story, the characters, the world — fantastic.  Plus, it’s laugh-out-loud funny (just like Kiersten White’s blog).  I really can’t gush enough about how adorable Evie is…  You can’t not love her.

If you get a chance, be sure to check out this book.  You won’t be disappointed, I promise.

You tell me: Have you read Paranormalcy?  What did you think?  Or, do you have some other book you’ve read recently that you recommend?

Embarrassing (and hilarious) typos LTWF: Gaining Some Perspective on Criticism