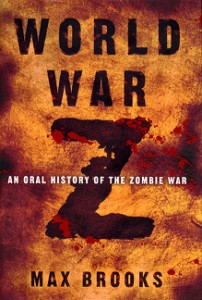 At a LTWF contributor’s suggestion (Savannah Foley’s), I picked up Max Brook’s World War Z.  And then I didn’t put it down until I had finished it.  It was that amazing; that terrifying; and that real.

The book is told as a series of narratives by various people who have survived World War Z — or the war against zombies.  Ten years after the “Zacks” decimated the planet, they’re still walking around and feeding on the living.  The stories go in chronological order, starting with when the war first began — the first instances of zombies.  It then goes through the zombies’ spread, the ways people coped, the failures of various governments to contain the problem, and the ways people turned against each other or learned to deal.  (For a more detailed plot, read the wiki entry.)

World War Z is less  story of zombies and more a story of society.  A story of ingenuity and culture.  I couldn’t believe how creative these people were in the face of such a crisis, and then I remembered — It’s not real, you idiot! It’s all the mad, creative genius of one writer.  You won’t be surprised to know that Max Brooks is Mel Brooks’s son (yeah, The Mel Brooks of Blazing Saddles and Spaceballs).

So if you can stomach heart-wrenching and terrifying stories, then buy this book.  NOW.  You will not be disappointed.  (You could wait for the movie with Brad Pitt, but I imagine that will be years.  Besides, I don’t see how a movie could possibly compare to the amazingness that is this book.)

You tell me: Have you read World War Z?  Do you have any other amazing zombie books you’d recommend?