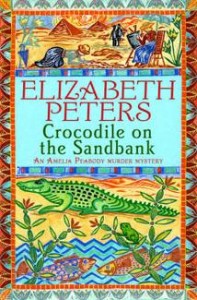 Because I was heading to Egypt and wanted to build up my anticipation, I decided to read a book set in Egypt.  After some Amazon browsing, I settled on Elizabeth Peter’s Crocodile on the Sandbank…  And devoured it.  So I moved on to Curse of the Pharaohs and then The Mummy Case.

It’s 1884, and Amelia Peabody is a “spinster” (the age or 32 was considered old back then!) of considerable wealth and considerable archaeological. While visiting Rome, she stumbles (quite literally) upon the sweet, fainted figure of Evelyn Barton-Forbes, and the two head to Egypt to sail the Nile… 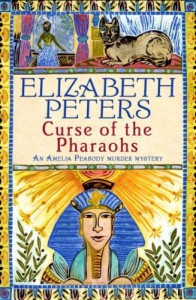 But their intended cruise doesn’t go according to plan when they’re forced into close proximity with two archaeologists: the very amiable Walter Emerson and the very infuriating Radcliffe Emerson.  Then there’s that problem with the mummy who won’t stop following them…  And the suspicious accidents…  Oh, and the botched attempt to kidnap Evelyn…

I won’t spill the beans on book 2, Curse of the Pharaohs, or book 3, The Mummy Case, because it would spoil book 1!  But let’s just say, book 2 is even better than book 1, and book 3 is somehow even more better.

One of the things that makes this series so addictive and entertaining is the characterization!  These characters are the most Larger-than-Life people I’ve ever read about and adored.  Truly — Amelia and Radcliffe have such forceful personalities, and their interactions are just so fun!

The “best” part of the series, though, is by far the setting.  Egypt comes to life, and 19th century Egyptology seems so real!  I’m dying to go back in time and excavate these ancient tombs, see the dingy but lively streets of Cairo, and experience a non-tourist-ridden Egypt.

Elizabeth Peters has a PhD in Egyptology, and boy, can you can tell!  She really makes Luxor, Cairo, the Nile, the pyramids, and everywhere else feel like it’s bustling around me.

If you like mystery, Victorian life, Egyptology, or Indiana Jones adventure, then this is definitely the series for you!

You tell me: Have you ever read books set in Egypt?  Or do you have any fun mysteries you recommend?

The Weary Traveler Returns Read a book, donate to a cause