Let’s kick off this Steampunk Month with some GIVEAWAY AWESOMENESS–whadaya say?

♥ And what’s more steampunky to giveaway than Scott Westerfeld’s Leviathan? ♥ 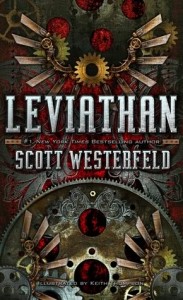 Scott Westerfeld, author of the Uglies series, is seriously amazing.  He’s on my I’m-Dying-To-Meet  List.  I mean, just read this great post from his blog (it’s a response to someone snobby knocking steampunk)–doesn’t that make you want to hug him and say, Thanks for sticking up for me.  Genre cooties should not be tolerated.

“Prince Aleksander, would-be heir to the Austro-Hungarian throne, is on the run. His own people have turned on him. His title is worthless. All he has is a battletorn war machine and a loyal crew of men.

Deryn Sharp is a commoner, disguised as a boy in the British Air Service. She’s a brilliant airman. But her secret is in constant danger of being discovered.

With World War I brewing, Alek and Deryn’s paths cross in the most unexpected way…taking them on a fantastical, around-the-world adventure that will change both their lives forever.”

Though Leviathan is labeled as young adult, it’s more middle grade (in my opinion).  Either way, it’s PACKED with steampunky goodness: giant machines, monsters, and spunky protagonists.  I mean, just LOOK at some of these illustrations! 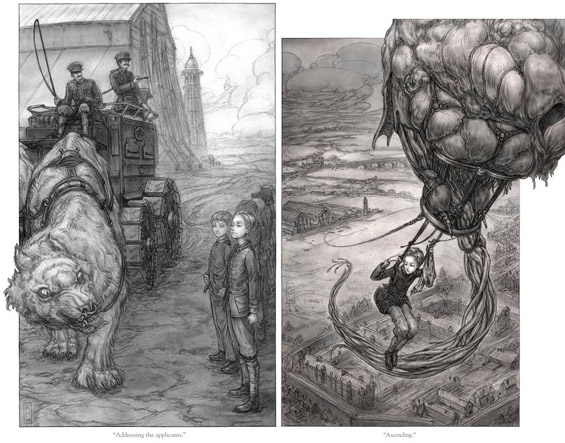 ♥ And in a few weeks–on February 25th, to be exact–I’ll use random.org to select a winner. ♥

P.S. I dyed my hair blue in a REBELLIOUS ACT OF STEAMPUNK (what I’m rebelling against, I don’t know).  Check it out here.