The Summoning: a book recommendation 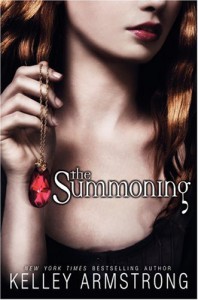 Wow, just wow.  I don’t know why it took me so long to pick up this book–I really regret not starting Armstrong’s The Summoning sooner.  The book opens with a darn GOOD prologue that officially scared the willies out of me, and the story just builds and builds after that.

As I’ve mentioned before, I love a good ghost story, and trust me when I say this is a GREAT ghost story.

After years of frequent moves following her mother’s death, Chloe Saunders’s life is finally settling down. She is attending art school, pursuing her dreams of becoming a director, making friends, meeting boys. Her biggest concern is that she’s not developing as fast as her friends are. But when puberty does hit, it brings more than hormone surges. Chloe starts seeing ghosts–everywhere, demanding her attention. After she suffers a breakdown, her devoted aunt Lauren gets her into a highly recommended group home.

At first, Lyle House seems a pretty okay place, except for Chloe’s small problem of fearing she might be facing a lifetime of mental illness. But as she gradually gets to know the other kids at the home–charming Simon and his ominous, unsmiling brother Derek, obnoxious Tori, and Rae, who has a “thing” for fire–Chloe begins to realize that there is something that binds them all together, and it isn’t your usual “problem kid” behaviour. And together they discover that Lyle House is not your usual group home either…

Chloe is one heck of a protagonist. Sure, she’s the typical doesn’t-fit-in teen, but…she actually is. In other words, she’s not a pseudo-freak (e.g. Bella Swan who thinks herself a freak but isn’t).  Chloe is just an average teen trying to get through high school and coasting right down the middle-popularity path. She’s heroic while also being afraid, and she really develops as the story progresses.

As for the secondary characters, Armstrong has created a brilliant cast! I love that no one is quite what they seem, and that for once, the guy we like is…well, I won’t spoil the romance!  Let’s just say he’s not your average Swoon-Worthy Hero (though he’s still majorly swoon-worthy!).

Throw in some creeeeeepy ghosts, a few nasty corpses, and an escalating mystery, and you’ve got the perfect formula for a satisfying read–heck, for a satisfying series.  The Darkest Powers series has quickly become one of my favorites, and the fact that I devoured all three books–The Summoning, The Awakening, and The Reckoning–in one week should tell you how much I love it!

If you’re in the mood for some stellar paranormal YA or a real spine-tingling ghost story, then you’ll definitely want to read Kelley Armstrong’s The Summoning.