The Lightening Thief: a book recommendation 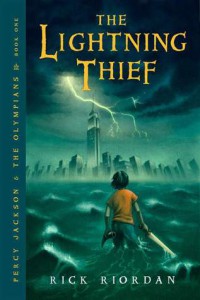 Rick Riordan’s first installment of the Percy Jackson series, The Lightning Thief, is so, SO good! I honestly don’t think I have enjoyed a middle grade novel this much since Harry Potter (no joke!). What’s not to love about modern day Greek myths and fish-out-of-water (quite literally) heroes?

After getting expelled from yet another school for yet another clash with mythological monsters only he can see, twelve-year-old Percy Jackson is taken to Camp Half-Blood, where he finally learns the truth about his unique abilities: He is a demigod, half human, half immortal. Even more stunning: His father is the Greek god Poseidon, ruler of the sea, making Percy one of the most powerful demigods alive. There’s little time to process this news. All too soon, a cryptic prophecy from the Oracle sends Percy on his first quest, a mission to the Underworld to prevent a war among the gods of Olympus.

From page 1, the voice had me hooked. Percy is just so compelling and so entertaining. I love his sarcasm and the way you feel like he’s just a regular dude telling you his very non-regular story.

If the voice hadn’t gotten me so thoroughly, then the characters would’ve been the thing to draw me in. I loved Annabeth (kick butt secondary females unite!) and Grover–not to mention all the gods and demi-gods and monsters.  Yeah, Riordan did an amazing job bringing this world to very vivid life before my eyes. I loved how he dropped in all the Greek myths–and I had so much fun identifying things before Percy sorted it all out.

What really got me (in a good way), though, was that it had so many nice twists and turns! Figuring out who the bad guys were, what the prophecy referred to, and seeing it all set up for Major Epic-ness in later novels made this one un-put-down-able book!

If you’re looking for some great adventure, the sort of lovable hero who just barely scrapes by, or a world of gods and goddesses, be sure to read The Lightning Thief!