I said my method for selecting a setting in Something Strange and Deadly was unscientific, remember?

Well, just look at how I wound up choosing Victorian times.

So then I scoured Victorian timelines, trying to find a good backdrop. Since I wanted my story to have an inventor, I thought a World’s Fair might work well (all those new-fangled creations and wares!). Then I narrowed that down to the first American World’s Fair–the Centennial Exhibition which (as you can guess) took place in Philadelphia in 1876.

From there, I added characters that could both help and hinder my heroine–a controlling Mama, an infuriating former thief, a debonair suitor, etc.

Finally, because I love being creeped out, I tried to think about what books scared me the most. I realized it was ghost/zombie stories. Nothing like a walking corpse to get your skin crawling!

Now mix it all together, stir it around, and what do you have?

Eleanor Fitt has a lot to worry about. Her brother has gone missing, her family has fallen on hard times, and her mother is determined to marry her off to any rich young man who walks by. But this is nothing compared to what she’s just read in the newspaper—

The Dead are rising in Philadelphia.

And then, in a frightening attack, a zombie delivers a letter to Eleanor…from her brother.

Whoever is controlling the Dead army has taken her brother as well. If Eleanor is going to find him, she’ll have to venture into the lab of the notorious Spirit-Hunters, who protect the city from supernatural forces. But as Eleanor spends more time with the Spirit-Hunters, including their maddeningly stubborn yet handsome inventor, Daniel, the situation becomes dire. And now, not only is her reputation on the line, but her very life may hang in the balance. 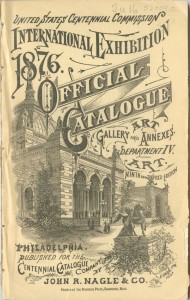 In terms of specific research, I focused heavily on the Centennial Exhibition: what was displayed there, who visited, what it looked like, how it was laid out, etc.

The same held true for Laurel Hill Cemetery, which is where most of the walking corpse action happens. I also had to know what technology did/didn’t exist, what life was like for a young lady back then, what etiquette demanded from the well-to-do, what idioms/phrases existed, and then how my own made-up world of necromancy operated.

I started with preliminary research that gave me enough info to write a first draft with, and then as I wrote, if I had a sticking point, I’d research that specific aspect. For example, I frequently had to look up various modes of transportation (a hackney versus a phaeton versus a standard carriage) or currency/costs. Like, would you believe an upper class lady’s gown would have cost over $300 of 1876 money!?!? That equates to thousands of dollars today. I guess all those layers and flounces and corsets just weren’t cheap to make…

I relied almost entirely on archive.org–and I’m relying on it just as much for researching book 2 (which is set in Paris)!

Had I known how much WORK it would take to tell this story–of which research was only a minor portion–I’m not sure if I’d have had the guts to do it. I wrote the first draft in a month, but then I spent 8 months revising it. When I finally started querying, I had rewritten it once, then revised it at least 5 times, and finally line-edited it twice. The first draft was clearly the work of a novice, so I needed all that hard work!

But you know what? It paid off. And, now I actually kinda know what I’m doing. My first drafts are much cleaner and require far less revising.

What about you? How did you pick or create the setting for your novel? And what kind of settings do you like to read about the most? Did you spend a long time learning and rewriting with your first novel?