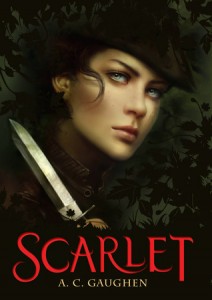 I opened this book, and after reading the dialect, I thought, “Huh…I’m not sure I’ll be able to read this…” Then, three pages later, I was so sucked into the story, I stopped noticing the dialect. All I saw was Scarlet’s VOICE–and let me tell you, she has one. A powerful, compelling, stubborn-as-hell voice that fits every impulsive, disgruntled course of action she chooses.

Many readers know the tale of Robin Hood, but they will be swept away by this new version full of action, secrets, and romance.

Posing as one of Robin Hood’s thieves to avoid the wrath of the evil Thief Taker Lord Gisbourne, Scarlet has kept her identity secret from all of Nottinghamshire. Only the Hood and his band know the truth: the agile thief posing as a whip of a boy is actually a fearless young woman with a secret past. Helping the people of Nottingham outwit the corrupt Sheriff of Nottingham could cost Scarlet her life as Gisbourne closes in. It’s only her fierce loyalty to Robin—whose quick smiles and sharp temper have the rare power to unsettle her—that keeps Scarlet going and makes this fight worth dying for.

To be honest, impulsive MCs are pretty common (erm…my own…::coughcough::), but Scarlet is easily the most convincing impulsive MC I’ve ever seen. She’s short-tempered, but only because she’s got some pretty big demons haunting her past. She’s emotional and deeply moved to help those in need, and best of all, she’s 100% kickbutt. I mean, the girl THROWS KNIVES! O_O

Honestly, though, the highlight of this story was the romance. I was just so, so, sooooo torn between John Little and Robin. I won’t tell you which boy she chooses, but I will say that I was utterly, utterly satisfied with her choice. And every scene she spends with that boy had my heart pounding and my lips grinning.

So, if you’re in the mood for Robin-Hood-adventure, swoon-worthy romance, or a tough-as-nails heroine, then be sure to pick up A.C. Gaughen’s Scarlet.

OH, and if you’re interested in winning a copy (along with some Scarlet-themed swag!) be sure to enter the giveaway here.

You tell me: Have you read Scarlet? Or do you have fave Robin Hood? (I’m all about the Disney fox, myself.)