It’s that day again–time for Sooz’s YA and MG Publishing Industry Lowdow. The general idea is that I share all the deals I know if in the young adult and middle grade publishing world each Friday.

My source for deal news is Publishers Marketplace, which requires a paid subscription. As such I’m only sharing part of the information here–basically, just author names and pitches. If you want to know deal sizes (e.g. advances), editors, publishers, and agents, I highly recommend you sign up for PM–it’s totally worth the cost!

I have two weeks to catch up on here, so let’s get started, shall we?

Katie McGarry’s young adult novella, CROSSING THE LINE, to follow the release in August of her debut novel, PUSHING THE LIMITS, where two teens who became pen pals after tragedy in their lives connected them, spend twenty-four crazy hours together, causing them to completely reassess their plans for the future and their unexpected feelings for each other.

Keri Smith’s middle grade THE POCKET SCAVENGER, in the style of a scavenger hunt, filled with activities and creative games for the reader, for publication in Summer 2013.

Playing with Purpose author Mike Yorkey’s middle grade TRUE LINSANITY, about the out-of-nowhere rise of Jeremy Lin, his faith and upbringing, taken from personal interviews, for publication in Spring 2012.

Bobbi Miller’s middle grade BIG RIVER’S DAUGHTER, bringing together tall tale legends Annie Christmas, Mike Fink and Pirate Jean Lafitte, with a ten-year-old as the snarky protagonist caught in a web of danger and intrigue during the early days of the Mississippi.

2011 Michael L. Printz Award winner Paolo Bacigalupi’s first middle grade novel, ZOMBIE BASEBALL BEATDOWN, which follows three boys on a local baseball team who discover that tainted meat from their town’s meatpacking plant is turning people and animals into zombies, for publication in Spring 2013; THE DOUBT FACTORY, a YA thriller about a teenage girl who discovers that her father is at the helm of an organization providing dangerous false messaging to society about global warming and other issues, for publication in fall 2013; and SEASCAPE, set in the same flooded futuristic world of Ship Breaker and his forthcoming novel The Drowned Cities, for publication in fall 2014.

Mark Goldblatt’s middle grade WHAT HAPPENED IN PONZINI, in which a sixth-grader must write to his English teacher about the terrible incident that got him and his friends in trouble, which means he must come to terms with not only his guilt, but also his complicated relationship with his manipulative best friend, pitched as Jerry Spinelli’s WRINGER meets Barbara Park’s THE KID IN THE REDJACKET, for publication in Summer 2013.

Claire Caterer’s middle grade THE KEY AND THE FLAME, about three children whisked to a world where magic has been outlawed who must wield magic wands, joust against royal knights, and determine who to trust if they hope to make it home, for publication in 2013 and 2014.

Scott Tracey’s new young adult series beginning with MOONSET, about the five children of warlock terrorists, who must struggle against the destructive legacy left by their parents, all while resisting their own capacity for darkness, in a two-book deal.

Lisa Amowitz’s young adult BREAKING GLASS, about a troubled boy struggling to keep his grip on reality as he unearths long buried secrets and reawakens old nightmares after launching an investigation into the disappearance of his longtime crush who vanished only to contact him from beyond the grave.

Cindi Madsen’s young adult ALL THE BROKEN PIECES, pitched as a modern-day FRANKENSTEIN reimagining where a woman wakes up with no memory of her past and two very distinct voices inside her head, only to uncover she’s the product of her scientist parents’ dark experiment, for publication in December 2012.

Eva Ibbotson’s middle grade THE ABOMINABLES, about a family of yetis, a complete novel found amongst the author’s papers after her death last year, for publication in Fall 2013.

Amy Tintera’s young adult REBOOT, in which two teens who have “rebooted” after dying must work together to rescue their kind from enslavement and end up falling in love in the process, in a two-book deal.

Mitali Perkins’s middle grade TIGER BOY, in which a Bangladeshi boy must choose between his loyalty to his father and his desire to protect an endangered Royal Bengal tiger cub from poachers, for publication in Spring 2014.

Bianca Turetsky’s middle grade THE TIME-TRAVELING FASHIONISTA IN THE KINGDOM OF CLEOPATRA, the third novel in The Time-Traveling Fashionista middle grade series, about a seventh-grader who receives a mysterious invitation to a vintage fashion sale in the mail and has her life magically transformed into a time-travel adventure, this time to Cleopatra’s empire in ancient Egypt, with full-color fashion illustrations throughout, for publication in Fall 2013.

Smells Like Dog author Suzanne Selfors’s middle grade THE IMAGINARY VETERINARY, a chapter book series in which a string of unusual events — from finding a lost dragon hatchling to tracking an escaped sasquatch — leads ten-year-olds to become apprentices to a veterinarian for imaginary creatures, in a three-book deal, for publication starting in Spring 2013.

Sarah Beth Durst’s young adult SWEET NOTHINGS, about a teen in the paranormal witness protection program, who, haunted by dreams of carnival tents and tarot cards, must remember her past and why she has strange abilities before a magic-wielding serial killer hunts her down, in a two-book deal.

Tracy Deebs’s young adult DOOMED, a modern-day retelling of the Pandora myth where Pandora opens an attachment instead of a box and harkens technological Armageddon in the form of a Stuxnet type worm and a Massive, Multi-player Online Game, for publication in Fall 2012.

So I’ve been holed up away from the internet for the past two weeks, and I don’t have much in the way to share of publishing news (besides, YA Highway does such a fantastic job, you can find meet all your writing/reading/publishing needs there!). I do have a few tiny orders of business though: 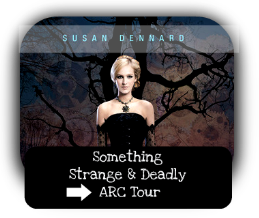 1) The winner for a signed ARC of Something Strange & Deadly is Tezza, a.k.a. SpadesHighReads! Huzzah! I’ll send you the signed ARC and a signed bookplate ASAP!

2) If that’s NOT your name there but you still want a chance to read Something Strange & Deadly, then don’t miss the ARC tour hosted by Holly Dodson. Those first five names chosen back in January were just the beginning, and in 26 days, she’ll be picking another slew of readers!

3) And finally, don’t miss our newest member to Pub(lishing) Crawl: Amie Kaufman! She’s an Aussie author who’s debut Wrecked (cowritten with Meg Spooner) will be out in 2013.

You tell me: Is there any industry news-bite or fun link you wanna share?