The Legend of Korra: a TV show recommendation 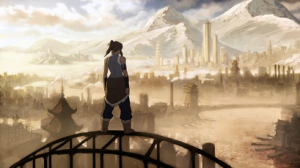 With only one episode left to wrap up the season, I am actually having pain in my chest at the thought of having to wait a year for more.

This story follows the adventures of the Avatar after Aang – a passionate, rebellious, and fearless teenage girl from the Southern Water Tribe named Korra. With three of the four elements under her belt (Earth, Water, and Fire), Korra seeks to master the final element, Air. Her quest leads her to the epicenter of the modern “Avatar” world, Republic City – a metropolis that is fueled by steampunk technology. It is a virtual melting pot where benders and non-benders from all nations live and thrive. However, Korra discovers that Republic City is plagued by crime as well as a growing anti-bending revolution that threatens to rip it apart. Under the tutelage of Aang’s son, Tenzin, Korra begins her airbending training while dealing with the dangers at large.

I love Avatar: the Last Airbender. Prince Zuko is possibly one of my most favorite characters of all time (I have a weak spot for redemption stories). I adore the dynamic between the characters (though, c’mon, who else is a Zutara fan?) not to mention the characters themselves. Sokka remains one my fave comic relief and I will never stop wishing I could have a sky bison.

The Legend of Korra is nothing like that series. Sure, it has the AMAZING BENDING (I think I’m a waterbender at heart, though firebending is my favorite to watch) and stays true to the whole avatar premise. But other than that, it’s very different. And honestly, I think the creators were right to take the storytelling in a new direction. Kind of like JK Rowling can probably never top Harry Potter if she wrote another fantasy kids’ series, the original Avatar just cannot be beat.

So enter stage left: an older cast of characters, almost no standalone episodes, high-high-HIGH action, and a new setting (the events of Korra take place 70 years after Avatar) with totally different technology and a totally different kind of society. From pro-bending tournaments (omg, it’s like quidditch but BETTER. Whenever stories introduce new “sports”, I’m elated. It adds so much depth to world-building.) to council meetings to nights on the town, Legend of Korra gives us a lot of subplot diversity…while staying true to one, primary plot: the growing problem of Ammon and the Equalists.

This is, perhaps, the biggest change from the original Avatar series: the chronological nature of the episodes. You can’t really skip any and still follow all that’s going on–which probably explains the introduction of a little announcer at the start of each episode. In his 1920s-style-radio-host-voice, he catches you up to speed so you can follow along with the current 20-min episode.

And WOW, guys, do they pack a lot in 20 minutes. It’s so deftly done that–as a storyteller–I’m left me slackjawed every week. Each episode (or chapter, really, for that’s what they are) follows a very clear 3 act structure ending with one HECKUVA climax. The action scenes in each episode leave me breathless, and for the last five episodes, I would say I was even moved to tears*–not because something bad happened, but because it was just so darn epic.**

Plus, have I mentioned that Korra is a GIRL who is A BADASS? She’s flawed, still finding herself, and driven to do good–a real YA heroine, if you ask me… Yet, she isn’t even my favorite female on there. Lin Beifong is just so tough but kinda gooey underneath. And then you have Asami, who–despite her overly pointy chin ;)–is an incredibly three-dimensional character who can kickbutt without bending. Her life ain’t great, and I find myself thoroughly invested in her personal journey.***

Oh, and let’s not forgot the power of the musical score. The Last Airbender was incredibly well-complimented by the music, but I think Legend of Korra might actually have it beat. Like I said–those action scenes are just so darn epic and the music behind it all is just so mindblowingly epic.

Well, I think I’ve gushed enough for one review. All I can say is, if you haven’t already, watch The Legend of Korra–BUT ONLY if you have already seen Avatar: the Last Airbender. While you can certainly start with Korra, I think it’s much more satisfying with some Avatar-love under your belt.

You tell me: Do you watch this show? What do you think?

*Also: At the end of episode 10 when something Really Bad happens to Lin Beifong, I COULD NOT STOP CRYING. Or shouting at the TV “NO!”.

**Also, also: When that incredibly hot General Iroh showed up shortly after Lin’s tragedy and spoke with ZUKO’S VOICE (actor Dante Basco, a.k.a. Rufio from  Hook), I literally started screaming behind my tears. My husband was very concerned as I shrieked over and over again: “It’s Zuko’s voice! It’s ZUKO!” In my mind, this instantly sets up a new love interest option for Korra, and I am ALL FOR love triangles…or squares…or pentagons, even. BRING IT.

***Also, also, also: Can I just say Asami is totally BAMF with that electric-glove-thingy? Oh, and I adore how the story set her up initially as Korra’s competition only to spin that on its head and make us LIKE HER.