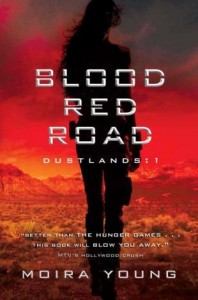 This book took me completely by surprise. Like, when Erin Bowman recommended it to me with gushing praise, I was expecting Moira Young’s Blood Red Road to be good…

I was not expecting it to be a single-sitting read or one of my favorite reads of ALL TIME.

Saba has spent her whole life in Silverlake, a dried-up wasteland ravaged by constant sandstorms. The Wrecker civilization has long been destroyed, leaving only landfills for Saba and her family to scavenge from. That’s fine by her, as long as her beloved twin brother Lugh is around. But when a monster sandstorm arrives, along with four cloaked horsemen, Saba’s world is shattered. Lugh is captured, and Saba embarks on an epic quest to get him back.

Epic quest, indeed! And gripping and wonderful! There was very little I did not love about this book.

First off: the main character, Saba, is tough. Like, she beats even Katniss in the toughness department, and–don’t hate me–but I actually liked her a lot more than Katniss. It’s strange though because she’s way more flawed than Katniss…so why would I like her more? Maybe for that very reason: she makes some pretty big mistakes, acts darn selfishly, and is downright cruel to her baby sister. YET, she does grow. The Saba at the end of the book is a completely different person from the Saba at the start.

And then there’s the love interest. I won’t even tell you his name because I want you to be pleasantly surprised like I was. And then I want you to fall head over heels in love with him like I did. He’s older than Saba (so I don’t feel creepy crushing on him), and he’s just as flawed as she is…but he also learns and grows. Oh, my heart literally tightens when I think about him. ♥

As for the world, it is the FIRST post-apocalyptic world I actually want to live in. Everything about it feels high fantasy–from the Colosseum-style slavery to the desert-sailing skiffs to the team of female rebels living in a forest hideaway. There was so much ADVENTURE woven into this vivid world, and–as all great book should do–the world was as much of an antagonist as the characters. Sometimes it helped Saba; mostly it stood in her way.

I really don’t have enough words to express how much I adored this book. I immediately dove into the sequel, Rebel Heart, which is just as good. I honestly don’t know how I’ll survive a full YEAR until the untitled third book arrives. 🙁

But you all: go now! Read Blood Red Road and sink into the harsh desert, the toe-curling romance, and the swashbuckling action. And after you do, let me know what you think.

You tell me: Have you read Blood Red Road? Did you love it as much as me–or at all?

The Next Big Thing Slam Book Happy End of the World (and Happy Holidays, if we live that long)