A Dawn Most Wicked cover! And some musical stuffs…

So I don’t have a whole lot to say. The Frenchman and I are packing yet again to move into a new house. Our current home is a jungle of boxes and packing paper. Hopefully this next home, though, will be the final home. At least for a few years. (I am so sick of moving! This will be our third move in just over a year!)

But you don’t care about that. You’re here to see the cover for A Dawn Most Wicked–and I can’t blame you. 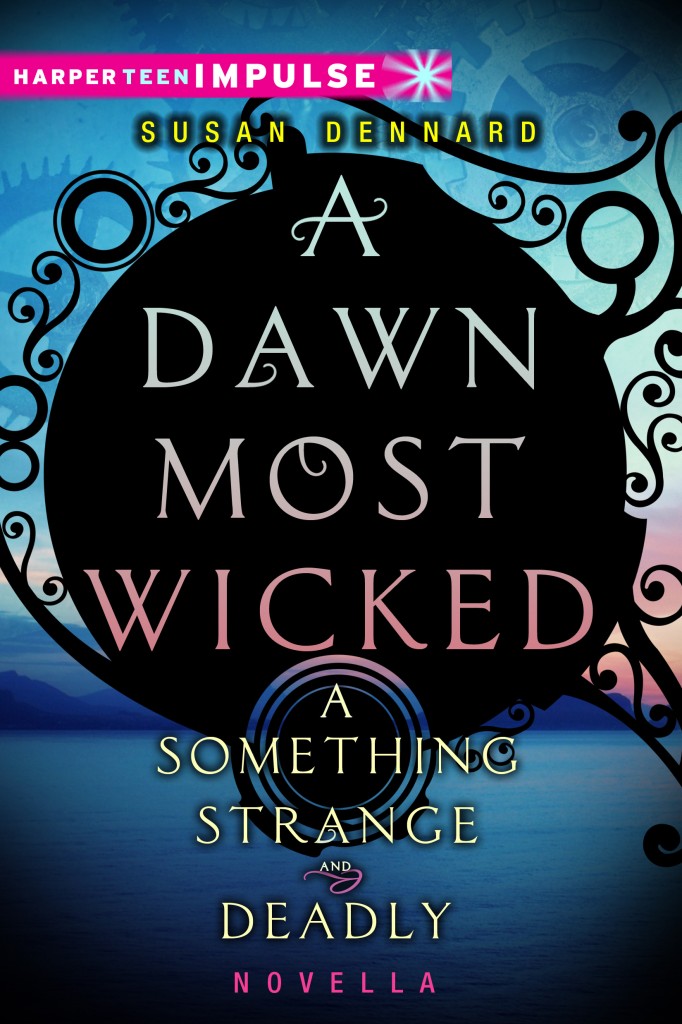 For realz, though, I love how there is a DAWN HORIZON in the background. Not to mention a river, which is where the book is set (the Mississippi River, to be exact). Plus, all the swirlies and colors are just so nice…

I think it very much embodies the music below, which I pretty much listened to on REPEAT the entire time I wrote this story (the best part is at the 1:24 mark, when the percussion kick in). It’s kind of sleepy like that gray mist before dawn, and then the drums pick up and it’s like the SUN is rising! (So cheesy of me, I know.)

Sigh. Seriously, though, I get so emotional every time I hear that song. My heart just wants to soar, soar, fly away…

Okay, but back to brass tacks (not to be confused with tax, which I must do for 2012…OOPS.), here’s a little about the novella, in case you didn’t already know:

Daniel Sheridan is an engineer’s apprentice on a haunted Mississippi steamer known as the Sadie Queen. His best friend–the apprentice pilot, Cassidy Cochran–also happens to be the girl he’s pining for…and the captain’s daughter. But when it looks like the Sadie Queen might get taken off the river, Daniel and Cassidy have to do whatever they can to stop the ghosts that plague the ship.

Fortunately, there happens to be a Creole gentleman on board by the name of Joseph Boyer-–and he just might be able to help them…

In other news, in case you missed all the tour stuff last week, I’m traveling across the country…er…part of the country with Sarah J. Maas, Erin Bowman, and Kat Zhang to do free workshops for young writers, sign books, and just have some goofy fun. We’re calling it the simple, but sweet Young Authors Give Back Tour. There’s also a giveaway involved, so don’t miss that. 😉

Also, in the vein of giveaways, if you haven’t seen our awesome Pay It Forward week on Pub(lishing) Crawl, then be sure to stop by! We’re giving books away and also celebrating the release of Poison, a YA fantasy by a brave author who is no longer with us–but whose family and friends are trying to spread the word about her book. It’s an inspiring, incredible story.

Now I am going back to packing for this move next week, AND, I’m going to work on a shiny new WIP that I am currently obsessed with. Whenever I hear this music, I want to WRITE.

I just imagine so many epic chase scenes and fights and BRAVERY, rawr!

Okay, enough of my trigger-happy ramblings. I’ve been something of a nut case since I turned in book 3–waffling between extreme excitement to be done…and then extreme sadness that it’s all over. 🙁

You tell me: What do you guys think about the e-novella cover?

Pub(lishing) Crawl: Books That Inspire What do YOU guys want to hear about?