Win a signed advanced copy of FROZEN by Erin Bowman! 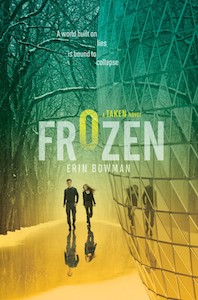 I’m back from Seattle, and I’ve got an awesome giveaway for you. Why? Because Frozen by Erin Bowman releases in 1 WEEK!!! 4/15 to be exact. I can’t believe a whole year has passed since Taken launched, but I’m also glad because now YOU can read the sequel too!!

So, to celebrate the forthcoming release, I have a signed ADVANCED READER COPY (a.k.a. ARC or galley) of Frozen for you all to win!

The Heists were only the beginning.

Gray Weathersby escaped from the primitive town of Claysoot expecting to find answers, but what he discovered shook him to the core: A ruthless dictator with absolute power. An army of young soldiers blinded by lies. And a growing rebellion determined to fight back.

Now Gray has joined a team of rebels on a harsh, icy journey in search of allies who can help them set things right. But in a world built on lies, Gray must constantly question whether any ally—or enemy—is truly what they seem… 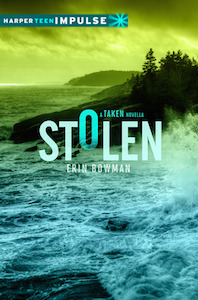 Plus, I’m giving away a copy of the beautiful prequel e-novella Stolen, which is told from Bree’s point of view. Seriously, guys, this story is so lyrical and moving.

Before Gray Weathersby uncovered the truth about Claysoot and the Laicos Project, a girl named Bree came of age in the coastal settlement of Saltwater—and made her own surprising journey to the world beyond its borders. In Stolen, discover the story of Bree’s life before she was Snatched from her home, before she joined the rebellion, and before she met a boy named Gray…

Finally, I have SIGNED SWAG from Ms. Bowman (which you can actually learn about today on Pub(lishing) Crawl)! Woohoo! All you have to do to enter the giveaway is fill out the Rafflecopter form and help spread the word about Frozen! I’ll pick a winner next week.

Aaaaannnnd, THIS GIVEAWAY IS INTERNATIONAL!! ♥

Pub(lishing) Crawl: Reconnecting With Your Characters Researching Your Novel