How to Craft Characters: Deepening with Backstory 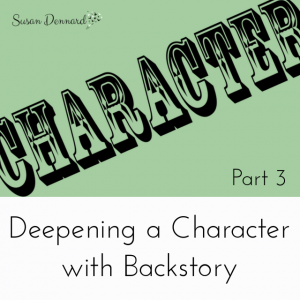 This is the third post in this series on crafting characters. To recap, here are the components I consider when crafting my characters–and these are in order of importance:

Now, I’m sure many of you are wondering WHY history/backstory is #3 on my list. I mean, a person is the sum of their past, right? It should be the most important thing!

A Tale of Two Bros

Let’s say you’re on the bus, and a bro with a cap sits next to you. He talks like a bro (his “voice”), and when the bus gets stuck in traffic, he complains like a bro.

“Man, I’m gonna be late for class.” He tugs his Gators cap even lower. “This blows.”

Ah, well, now you know his external need (to get to class on time) in addition to his voice. And as you start chatting with him, you discover what’s at stake: he’s going to miss the final exam if this bus doesn’t hurry the hell up. Worse, he’ll fail the class if he misses the final exam, and in turn, he’ll lower his GPA and LOSE his scholarship! WHOA, the poor guy!

And, double whoa: you have a story. You don’t need to know ANYTHING about where this bro came from to understand what he wants and what’s at stake if he doesn’t get it.

Basically, you could write a complete story with a strong beginning/middle/end without any history ever coming into play. Bro needs to get to class on time–will he or won’t he?

Let’s say, though, that while you’re stuck in traffic, you notice the bro texting someone. This someone is a real jerk, and he’s saying stuff like, “Don’t fail that final, dickweed.”

The bro catches you staring at his screen and flushes. “That’s just my older brother. He’s a jerk.”

“New York. He graduated with honors two years, and one of his frat brothers got him a hot shot job in Manhattan. My dad’s from Manhattan, so he always wanted us to end up there.”

“Are you in a frat?” You think this is a polite question that might, perhaps, distract the poor bro from his current troubles.

But he only glowers and slouches lower in his seat. “Naw. I tried for the same fraternity as my brother, but there was some rumor going around that I…” He leans in and whispers something TRULY awful into your ear. “But I didn’t do that,” he hastens to add. “That’s just what someone said, and it ruined my chances of anyone letting me join.”

You believe the bro didn’t do what that rumor said–and you can’t help but suspect that perhaps his older brother is the one who started that terrible tail.

Now, how did learning about the bro’s family history change things?

It certainly deepened the story (and perhaps increased your emotional investment in it). It also humanized the character. He’s not “just a bro” anymore, right? He’s more 3D with this tangible backstory that we can all relate to in one way or another.

If you’re like me, though, you don’t necessarily know the backstory/history of your character until you start writing. That said, I don’t approach a book with a TOTALLY blank slate. I usually know the bare minimum about a character.

For example, when I started Truthwitch I knew these things about Safiya, one of my heroines:

That was what I knew. I had no specifics, and I didn’t need them.

You see, part of the joy of writing for me is having those in-scene SPARKS–those little snippets of a childhood or experience that you can suddenly insert and that you didn’t know had happened.

But remember: it’s those LITTLE details that matter most.

It’s All in the Specific Details

Show don’t tell, right? That’s what we’re taught, and it’s an invaluable lesson to have.

Small details and specific memories are HOW we show a character’s history.

So, here’s an example of a tiny detail that came to me as I drafted a scene between Safiya and her uncle (pardon the roughness of the writing):

“No,” he cut in. “This is not a drunken scheme.” Eron splayed his hands on the glass, and old burn scars on the backs of his fingers and knuckles stretched taut.

Safi hated those scars. She’d stared at the white pocks and holes a millions times growing up. In Praga. In Veñaza City. In any town large enough to boast a decent taro game, Safi had watched those hands fan out cards while Eron waited for her signal to fold or pursue.

“You have no idea what war is like,” Eron went on, tone hazy as if his mind drifted across the old scars like his eyes did.

I could have simply said,

Safi’s uncle was a drunk who always forced her to use her magic in his taro card games.

That took fewer words, but…Well, I hope you can gauge which example works better. Which feels more real.

Of course, you can’t ALWAYS show critical backstory or information. That can get unwieldy or slow pacing to much. I have a post here on how to weave in more the expository-type information.

Alright, I’ll leave you on once more example. In this snippet, I introduce a critical piece of my pirate prince’s character. I could’ve simply said,

Merik’s homeland was starving, and as such, he was a careful young man–never wasteful.

But instead, as I wrote the scene, I realized he had his backstory could actually give him a fun character quirk that I could use again and again throughout the series.

Merik’s furious gaze dropped back to his plate. It was scraped clean. Even the bones had been swept into his napkin. Several of the other guests had noticed—he hadn’t exactly hidden it when he used the beige silk to pluck the bones from his plate.

Merik was even tempted to ask his nearest neighbors if he could have their chicken bones, most of which were still untouched and sat surrounded by green beans. Sailors never wasted food—not when they never knew if they would catch another fish or see land again.

And especially not when their homeland was starving.

This was a different approach. In the first example, I used a physical feature to trigger emotions and specific memories of the past. In the second example, I used a specific action (a funny one) to hint at my character’s history. Either way works, and there are certainly OTHER options for weaving in these tiny, specific details.

You tell me: How do you discover backstory? How do you insert it into your story?

How to Craft Characters: Desperate Needs The Writing Is All That Really Matters