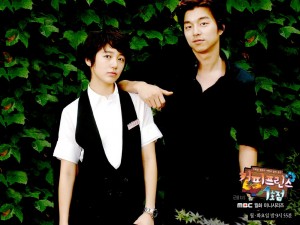 So, if you know me or have followed the blog for long, you know I love Kdrama.  What is that?  It’s South Korean TV shows — usually romantic, usually funny, usually dramatic.  This show is one of those, and this is my new Favorite Kdrama.  That’s right, Coffee Prince beats out My Lovely Kim Sam Soon.

Go Eun Chan is a tomboy, complete with short hair, a black belt in tae kwon do, and baggy punk clothes.  She’s often mistaken for a guy, but she doesn’t mind — she’s got to hold a ton of jobs to feed her family and men get paid more.  When she’s mistaken for a pretty boy and offered a job pretending to be another guy’s boyfriend, she jumps at the opportunity (and the high salary!).  Now she just has to pretend to be a boy…  Not so hard, right?  Unless you start falling for the guy you’re fake dating… 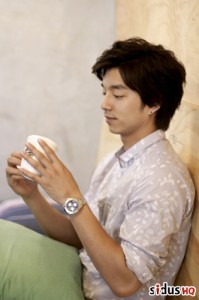 Choi Han Kyul (::swoooooon::) is a cocky rich boy who has to get married and prove he can run a business — or else he loses all his money and lavish lifestyle.  To avoid the marriage aspect, he hires a young delivery “boy” to be his boyfriend.  A gay guy can’t marry, right?  But…he finds himself more and more attracted to this other boy, and it’s starting to scare him.  He’s got no problem with homosexuality, he just never thought he was…  Why can’t the fun, carefree Go Eun Chan just be a girl?

Okay, I can’t express to you how FANTASTIC this show is.  The first episode, I thought, “Hmm. Okay.  This is funny.  The lead girl is adorable and endearing.  I’ll watch episode two.”

After that, I was HOOKED.  I think I watched the entire series (something like 20 hours of TV) in one week.

The sexual tension (wow!), the devastatingly handsome hero (double wow!), and the amazing acting made this show 100% addictive.  I really didn’t know how all the conflict would work itself out.  I was as sexually confused as the hero, and as miserably in love as the heroine.  The secondary characters were all amazing, and the subplots woven in superbly.

Great show.  You should definitely check it out.  You can watch all the episodes online here, and below is the first part of episode one.

You tell me: Any TV shows you’ve become addicted to lately?  Have you ever watched Kdrama?

I Heart ‘NSync My Fairytale Castle