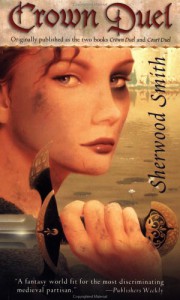 ♥ Here you go, Adriana. I’ll put up book recommendations on Sundays.  JUST FOR YOU. ♥

This book (and it’s sequel, Court Duel, which is now sold with book 1) is AMAZING. Sherwood Smith is one of my favorite writers–she is a true master of her craft–and this YA fantasy doesn’t fail to deliver.  I actually read this for the first time when I was 14-years-old, and after some recent gushing with fellow readers about how swoon-worthy a certain hero is, I decided to reread it.

And oh man, is it just as wonderful as I remember.

Young Countess Meliara swears to her dying father that she and her brother will defend their people from the growing greed of the king. That promise leads them into a war for which they are ill-prepared, which threatens the very people they are trying to protect. But war is simple compared to what follows, in peacetime. Meliara is summoned to live at the royal palace, where friends and enemies look alike, and intrigue fills the dance halls and the drawing rooms. If she is to survive, Meliara must learn a whole new way of fighting-with wits and words and secret alliances.

In war, at least, she knew in whom she could trust. Now she can trust no one.

Oh Mel, you’re so awesome.  Seriously, she’s a kick-butt heroine who learns her weaknesses and strives to overcome them.  She’s brave, clever, and heroic–everything I love to see in YA.  I loved Mel when I was 14-years-old, and I loved her even more now.

And did I mention the swoon-worthy hero? I won’t say his name because you spend 2 books trying to figure out if the love interest is who you hope it will be.  And WOW is it satisfying when the couple finally unites!

Note: if you’re a writer, notice how deftly Smith writes.  She’s a proponent of avoiding cliches and finding unique wording–and she’s darn good at applying it herself.

You tell me: have you read Court Duel?  Did you love it or hate it?  And, do you have any book recs to give me?