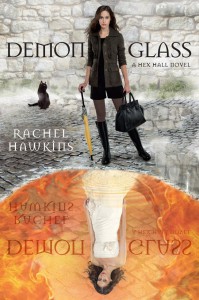 Wow. Just WOW.  I finally picked up the sequel to Rachel Hawkins Hex Hall (which I adored), and I devoured it in a single sitting.  If you liked the creepy-factor, spunky heroine, and super sexy Archer from the first book, then you will be blown away by book 2.

Sophie Mercer thought she was a witch.

That was the whole reason she was sent to Hex Hall, a reform school for delinquent Prodigium (aka witches, shapeshifters, and fairies). But that was before she discovered the family secret, and that her hot crush, Archer Cross, is an agent for The Eye, a group bent on wiping Prodigium off the face of the earth.

Turns out, Sophie’s a demon, one of only two in the world—the other being her father. What’s worse, she has powers that threaten the lives of everyone she loves. Which is precisely why Sophie decides she must go to London for the Removal, a dangerous procedure that will destroy her powers.

But once Sophie arrives she makes a shocking discovery. Her new friends? They’re demons too. Meaning someone is raising them in secret with creepy plans to use their powers, and probably not for good. Meanwhile, The Eye is set on hunting Sophie down, and they’re using Archer to do it. But it’s not like she has feelings for him anymore. Does she?

Okay, so I’ve declared my never-ending love for Archer before, but…I’ll just throw it out there again: boy is a 10 on the Sooz Swooning Scale. Seriously, I didn’t know how Hawkins could possibly make the romance as tense or entertaining as she did in book 1, but whoa was I wrong.  The romance in Demonglass will have you bouncing in your seat and grinning like an idiot (or at least I was).

And of course, the protagonist, Sophie, is just as wonderful and snarky as ever. I laughed out loud on more than one occasion, gasped in terrified horror, and rooted for her constantly.

Oh, and did I mention the mystery?  I LOVE how Hawkins drops hints and then deftly ties it all together at the end. I WANT BOOK 3 NOW.

If you haven’t read Hex Hall, then run to the library right now.  Check out Demonglass at the same time, and be prepared for an amazing and unique paranormal ride!

You tell me: Have you read Hex Hall or Demonglass? What did you think?